She was really wanting a cowgirl party, with her new cowgirl Jessie (Toy Story) obsession, but we did a horse/cowgirl party for her 6th birthday party, so I was really hoping to do something else. I had a few ideas, and thankfully she got very excited about doing a Candy Land birthday party. I must say, this was probably the most fun party I have done so far. I would definitely recommend this theme to anyone with a little girl (I'm sure it could work for a boy too). I did get a ton of great ideas from here: Birthday Party Ideas.com. I scrolled through and found the ones that would work the best for us, and also came up with a few of our own. I also did a whole lot of googling looking for more ideas and photos of Candy Land cake, which is what has inspired my posting. I am hoping it will be of help to someone wanting ideas for their Candy Land party!

We made some super cute invitations. The kids had fun cutting out circles for them. And I think Miss B. assembled all of them herself, with just a tiny bit of help from  mom. Unfortunately I did not get a photo, so I need to find the one extra we made for her. Basically it is colored cardstock circles stacked on top of each other, about 5 of them, each one getting smaller. On the smallest circle we printed "King Kandy cordially invites you to Miss B.'s 8th Birthday Party. On the back side were just two circles, and in the smaller circle it had all of the birthday party info. In between the front and back we put a straw as a lollipop stick (it did not work as well as I had hoped, not sturdy enough, maybe a popsicle stick would work better) and tied a ribbon at the top of the stick as well. They were so darling, and more than one mom said they daughter had to show everyone the invitation.

We also made out own pinata. I got instructions here (Family Fun: How to make a pinata). It did take some work, but we had a lot of fun doing it. My daughter even told me I was "the best mom ever". :)

Find a large balloon, inflate and tie it. I followed the recipe for the paste, and found it to be more than enough. You could probably half the recipe. 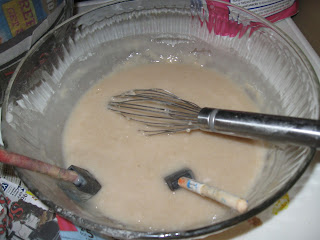 It is messy and gooey, so here I am in my awesome IKEA apron. 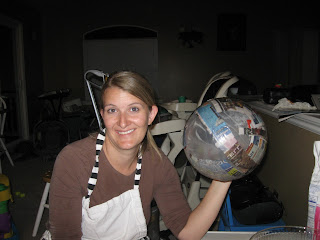 I did not follow their directions for applying the strips of newspaper. I did not want to dip each newspaper strip in the paste and basically squeegie it off. I found instructions somewhere that said you could cover the balloon in the paste (or at least a small section at a time) and then put a dry strip on it. Then you cover that strip in the paste and keep doing that. That was much less messy, and much less time consuming as well. It took about 3 coats of newspaper, and I waited at least 6 hours between coats.

Here it is unpainted. It ended up being a little lopsided on the cone. For the cone we just used a rolled up piece of posterboard and taped it well. 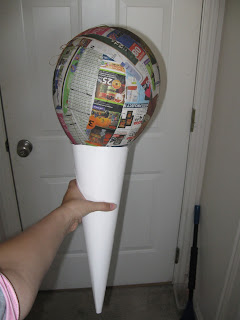 We taped the balloon to the cone and then did another layer of paper mache' to attach it to the cone more securely. My daughter is holding the deflated balloon in her hand. Once you pop the balloon it shrivels right up and comes out the hole you cut. 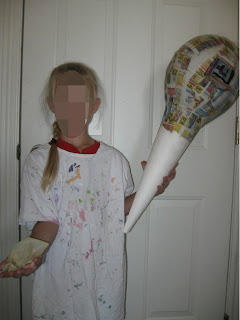 We cut a hole with a steak knife, and then after inserting the candy taped it shut. 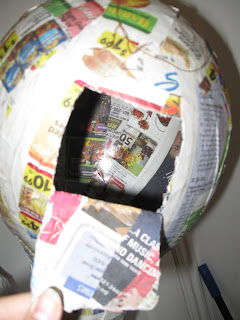 Here she is painting it She chose the colors herself. :) 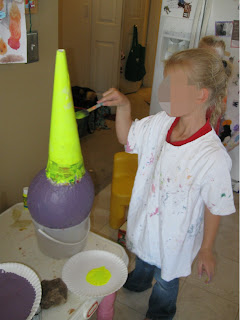 We kept putting off putting the tissue paper squares onto it, and it was a crunch at the last minute, but we got the cone covered, just hours before the party! To attach the tissue squares we just crumpled and glued. We tried the old scrunch them around the end of a pencil and dip that in glue, but it took longer. :) 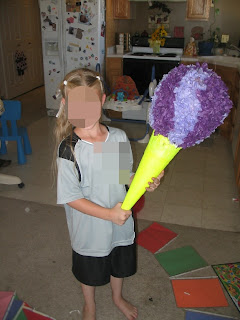 Miss B. did say, "After all this work we are just going to destroy it?" But it was a lot of fun to make together, so we both decided it was worth it. Pinatas are so expensive to buy too! We had used some embroidery thread to hold the pinata, but it broke after a few swings, so at the end my sweet husband just held it by the cone. I loved watching his face as the girls took some wild swings at it! My advice, use some thick yarn, maybe doubled to attach to the pinata.

The cake was a ton of fun, and full of sugar! We made a Candy Land board game. We used starburst for the game squares, mini candy canes, icecream cones, marshmallows, green coconut grass, tinted frosting, skittles, gumdrops, and more!

Since I made two cakes for the two parties, the first was kind of a trial run. I had used white frosting and then covered it in the coconut grass 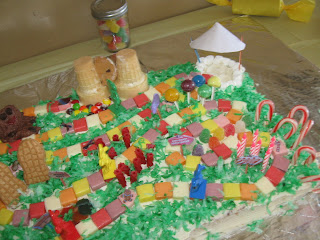 (most of the girls were not coconut fans, so thankfully it had a few sections sans coconut (the peppermint forest, gloppy, and Snow Flake Lake).  The second cake I tinted the frosting green, and it turned out better. 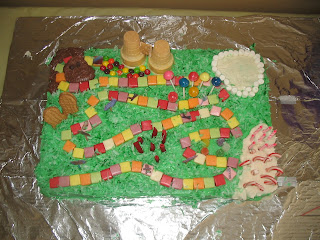 I also took photos of each of the signs on the board game, (peanut acres, gumdrop mountains, etc) and stuck them in my photo editing program and printed them all on one sheet. 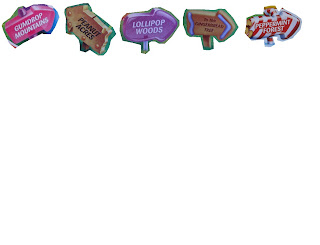 We cut them out and attached each to a toothpick and stuck them in the appropriate places on the cake. The Peppermint Forest sign was very close to the candles (because Miss B.'s candles were pink striped like the candy canes she wanted them in the peppermint forest), so when we lit the candles that sign burned! We sanitized the game pieces in the dishwasher and placed them strategically on the cake as well.

This is what we used for each section: 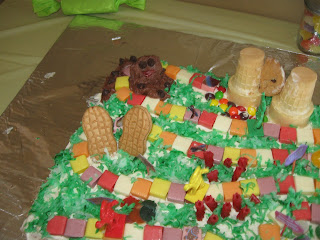 For decorations we found an old Candy Land Lotto game that came with little tiles. We used the tiles to kind of confetti the table. 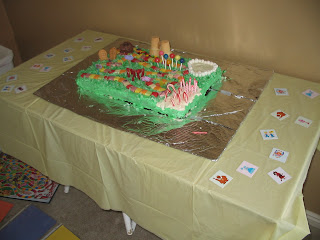 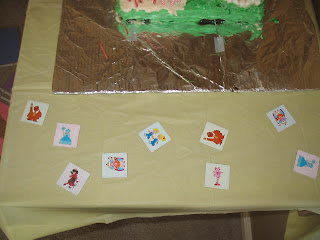 We didn't buy any themed plates, cups, etc. Instead we just bought a rainbow of cups, plates, utensils, tablecloths, and napkins, and since they were all from the Dollar Store, we kept it under budget! My daughter
made the little candy rolls on the table. I gave her the empty toilet paper tubes and tissue paper (again, from the $ store) and some scotch tape and she did them herself. 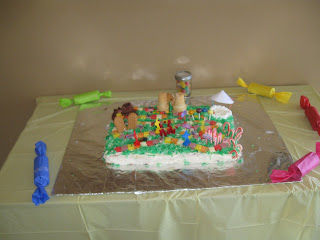 We made a giant size candy land game, at least the squares anyhow (construction paper in plastic sheets) but sadly we ran out of time to assemble it, and it was too windy outside anyhow, so we just used it as a decoration. Miss B. made the pink squares, the ones with the gumdrop, ice cream, etc, and being that she is a little artist, they turned out so cute! And we put actual licorice in the stuck in a licorice space squares. 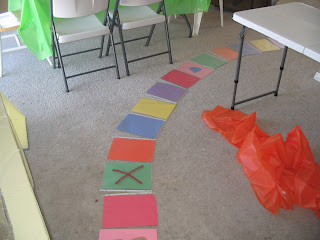 We made some darling lollipops with styrofoam circles from the dollar store, kabob skewers, cellophane, and ribbon. The we added our Christmas Candy Canes. We also used some kid flooring stuff to make the candy land squares up our walkway. If you click on the photo you can see them a little larger. Longer skewer sticks might have been better, but it still looked darling! 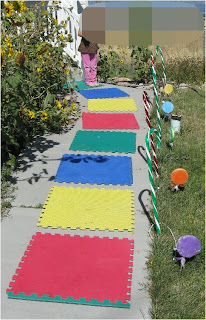 We made a cute Candy Land sign too. We wrapped pink plumbers tape around some leftover pvc pipe, and then printed the Candy Land words and taped them on a paper. 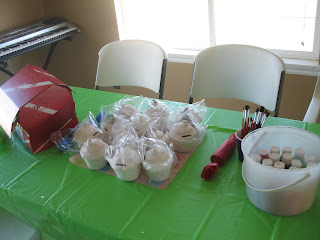 We also had a "Guess how many gumdrops are in the jar game" We just used a small jelly jar, and the closest guess got to take it home.

The loot bags each girl got to take home were so fun! I just love Oriental Trading! I tried looking online at other places, but you can't beat the prices and selection. I also looked for anything "sweet" themed at dollar stores, party stores, and big box stores, but no luck.

We got cute piece of cake shaped boxes and in them we put: candy cane twist erasers, gingerbread man stampers, personalized candy cane pencils (Thanks for coming, from Miss B.), a gingerbread man lollipop, and of course a little candy. Unfortunately Oriental trading did not have as much selection as I was hoping, but a month later they had a ton that could have worked, because they bring it all out for the Christmas Season. They even have an almost Candy Land theme, I think it's called Candy Town. So buy ahead, at Christmas time, if possible!

For a quick easy gift wrap, scrunch the ends to make it look like a big piece of candy! 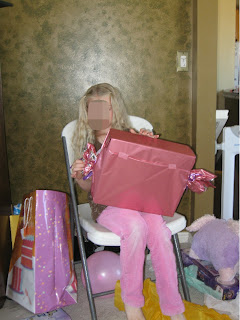 I think the most fun part of this party was that my daughter was old enough to help with so much of it, and she just LOVED every little detail!
birthday parties cake candy land pinata 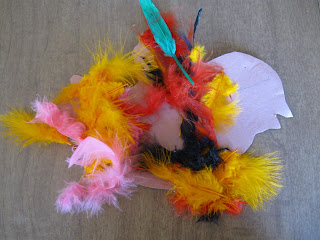 Last week was my last time teaching preschool for Mr. T. This is so bittersweet. My little boy is old enough to go to kindergarten. He is more than ready, me, not so much! I don't know what I am going to do with myself (well, besides taking care of infant twins!). I have been in a co-op preschool group for the last 5 years! It will be strange to not be preparing lessons and such. Maybe I will find the time to post lots on this blog of things I have done for the last five years, but no guarantees!

One easy bird project we did was this:


I found a bird coloring page online and cut it out on brown construction paper. Then I gave the kids white glue and feathers and let them create their bird. They loved picking colors for their birds. The boys of course did not want the pink or purple feathers (cheap tip-- my daughter's feather boas leave feathers ALL over the house. When I am feeling ambitious I gather them up and save them in the art supplies). It was also suggested to let the k… 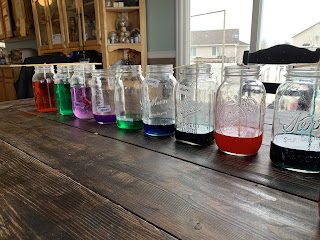 But I am trying to find things to keep our younger kids invested in learning. We’ve come up with a schedule to try to keep to, with family walk time, quiet time, chore time, school assigned learning, and such. We also put an hour space for creativity. This is the time I am hoping I can attempt a few of the hundreds of things I’ve pinned.

So today we made crystals, or rather we started making crystals.

I figured we have lots of time to experiment, so why not?

We made Borax Crystals


I’ll update this post as we have more crystals forming. But most of these can be made with items you might have around the house. Please don’t f…