Parenting a child with special needs

A whole new world of compassion 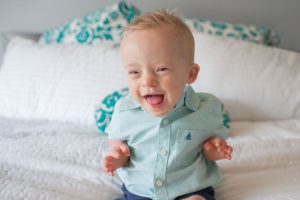 “When I first met with Jamee Funk, Rainbows’ Physical Therapist, she congratulated me on having a child with Down Syndrome,” said Stevie, William’s mother. “I didn’t get it. I didn’t understand at that time.”

Will was an after birth diagnosis, nothing was caught on screenings, the pregnancy was normal, labor was progressing normally and then the doctor realized he was breach. When he was born healthy and breathing, Stevie and Andrew, Will’s father, were thrilled he was crying.  “When I looked at him, I briefly thought, ‘Oh wow, he looks like he has Down Syndrome’,” said Stevie.

The first couple of days, Will was not eating well and when the family was ready to go home, Will’s nurse couldn’t get his oxygen level up. She called another nurse and then there were 8-9 attendants working over him. Will was sent to NICU and there diagnosed with Down Syndrome.

“I instantly knew it was true,” said Stevie. “I literally felt like I was dying. My world came crashing down. I felt like my body had betrayed me. I took on this instant guilt that I had made him that way.”

In NICU, Will had IVs in his head and hand. The doctors found a large hole in his heart that would require open heart surgery and Will was also diagnosed with TMD, a form of infant leukemia. He would need platelet transfusions and if they didn’t work, chemotherapy.

“I felt completely helpless and struggled with feeling hopeless,” said Stevie. Then the transfusion worked. Will remained in NICU for 12 days and then the family finally went home.

What followed were a million doctors’ appointments. “We were constantly on edge,” said Stevie. “We’d been thrust into a world of being our child’s advocate, doctor and nurse and we were completely overwhelmed with every aspect.”

Stevie and Andrew found the Down Syndrome Society of Wichita; they pointed the family to Rainbows. “We didn’t know anything about Rainbows,” said Stevie. “We were afraid of what things were going to cost, the unknown. To know that Rainbows was not going to charge us was the absolute biggest relief. I can ask any question to Rainbows and they can point me to the answers.”

“I’ve worked with Will and his family since he was a 3 month old,” said Jamee. “His sweet mama jumped right into our visits and our primary service provider model. She has so many good ideas about different ways to do things because she knows her son, and this has made visits much more productive and meaningful.”

Will had open heart surgery at 5 months old and was in the hospital for 8 days. “It was scary, but it had to be done,” said Stevie. “It was completely life changing. He was pink for the first time in his life and able to take a bottle without choking or going to sleep. He slowly started gaining weight.”

Now 2 years old, his health ebbs and flows, but Will is thriving, gaining weight, using sign language and a few words, and walking all over the place with his walker. He loves to sing and read books. He is joyful and really, really fun. “Will has changed so much over the last couple years from a sweet, snuggly baby to an ornery, sweet little boy,” said Jamee. “He is zipping around all over his home, reading books with mom, and dancing with his sister. It’s so fun to see. I’m grateful to be a small part of his adventure.”

And Stevie now understands what Jamee Funk said to her on their first meeting. “Will opened a whole new world of compassion we didn’t know about,” said Stevie. “I still have times where I think How is this my life? Why is this happening to me? But, I have a deep sense of contentment that this is what I was made for. I have the privilege and a deep sense of purpose to be his mom and advocate for him in every way possible.” 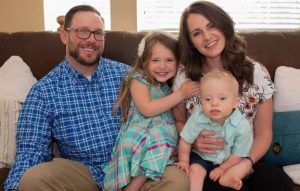 “When you have a child with special needs, you have to spend more time with that child taking them to doctor and therapist appointments, taking extra precautions against the pandemic, and working with them one-on-one,” said Stevie. “For Delaney, Will’s older sister by 4 years, this was a blunt transition. Having Will as a brother has made her more compassionate, loving and aware about inclusion in different things, like wheelchairs or talking differently.”

“Will’s older sister is like a little physical therapist in training,” said Jamee. “I’ve enjoyed watching her grow too. She is Will’s biggest motivator during visits so I love having her help during visits.”

Social media has played an important part in Stevie’s life as a mother of a child with Down Syndrome. “For me, it’s been life changing to be able to follow people on social media and to connect with other parents,” she said. “I hear their stories and I can imagine Will walking, running, playing, going to school, graduating from college, getting married. Through them, I see the light at the end of the tunnel. As Will’s mother, I am privileged to advocate for him. I also try to share and educate others, because while it is scary, there is light on the other side.”

“Every aspect of being a mother is hard,” said Stevie. “I am blessed that I get to see every step with Will. Will truly is the sweetest little spirit.”

Andrew is a pilot, musician and singer/songwriter. He is the introvert of the family, preferring not to be in front of people. Stevie is also a singer/songwriter and worship leader at their church and has an online-based business that she does part-time.