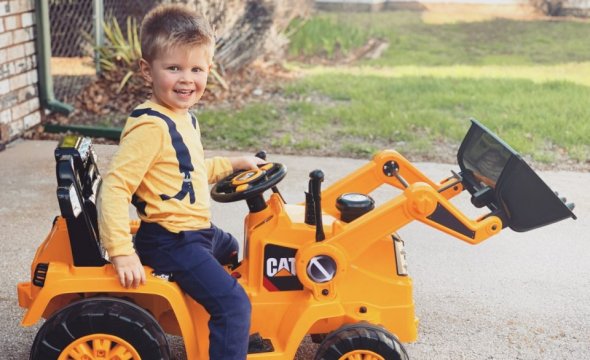 With full-time work schedules, Sonjia and her husband Brett deeply appreciated Rainbows’ flexibility as their son received early intervention services. “Rainbows’ staff is beyond welcoming and has your child’s best interest in mind,” said Sonjia, Braxton’s mom. “They are accommodating to schedules–which is a big deal when both parents are away from home during the day. Rainbows will use every effort they have to help your child grow.”

A family with two busy parents, Brett was recently honorably discharged from the Navy and is now a field service engineer. Sonjia is going to school to obtain her teaching degree in early childhood education.

When their son Braxton was first diagnosed with a speech delay, he was seen at another local agency that recommended reaching out to Rainbows. “Brax made drastic changes after starting speech services with Rainbows,” said Sonjia. “A little boy who barely made any verbal attempts came right out of his shell within months.  It was a night and day difference. When he was re-evaluated for early childhood preventative services, he no longer was a candidate to need their services because he was meeting all the milestones.”

Braxton and his family worked with Nicole Nickel, Rainbows’ Speech/Language Pathologist.  “Braxton was one of those kiddos, during Rainbows’ speech therapy, who was such a joy to go and visit. Each time I would walk in the door, he had a big smile on his face, and was ready to play,” said Nicole.  “He is funny, spirited, and social. When the speech clicked for him, he made progress very quickly. After that point, the visits became so much more fun with this little guy as he was able to share his thoughts with me and caregivers. He made so much progress during his time in early intervention.”

“Rainbows impacted our lives tremendously,” said Sonjia. “Nicole not only made Braxton feel comfortable enough to find his voice–but she also helped us with ways we could continue building on his speech skills. I sometimes wonder where his speech would be had we not reached out to Rainbows.”

Braxton is a confident, curious, happy little boy. “He doesn’t hesitate to use his verbal skills to the fullest,” said Sonjia. “It is now hard to get Brax to stay silent for more than a few minutes, haha!”