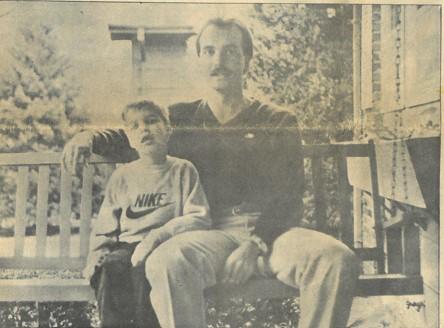 “From the moment he was born, CJ was a kind soul,” said Frank Seitz, CJ’s father. CJ was born with the umbilical cord wrapped around his neck, but no evidence of brain damage at the time of his birth. “We thought we had a perfectly normal child,” said Frank.

When he was 4 months old, CJ’s parents began to worry about his development and at six months, CJ was referred to a Wichita doctor who discovered evidence of seizures. It was found that half of CJ’s brain had not developed in utero. CJ was diagnosed with brain damage which caused multiple physical and developmental delays.

At the time, the Seitz family was living in Hays, but with CJ’s diagnosis they began to look in Topeka and Wichita for services to help their son. “We found Rainbows and it couldn’t have been more perfect,” said Frank. “Everything came together for us.” Frank applied for and received the job as Director of the Derby Recreation Commission and the family moved to Derby.

In 1981, 2 ½ -year old Clint (CJ) Seitz started childcare at Rainbows United, located at that time in the basement of Pleasant Valley Methodist Church. The Rainbows’ van picked up CJ every day and took him to Rainbows. CJ received daily services that included physical therapy, speech language therapy and special education. He was toilet-trained, learned to walk at the age of 4, and made great strides in speech. By the time he graduated from Rainbows, CJ was able to express himself.

With his foundation from Rainbows, CJ entered the Derby public school system in 1985. He attended Ability Point and YES Camp, and when he turned 16, CJ began receiving services with KETCH. When CJ was ready to move into a group home, Frank put a down payment on a house in Derby that became a KETCH group home, and CJ became Frank’s neighbor.

Frank and CJ enjoyed sitting on the porch together in the evenings. “CJ liked to smoke,” said Frank, “because he liked to see the smoke rise in the air. He also loved storms, Journey, strobe lights and fog machines.” Frank tells the story of the fire department being called to his house due to the “smoke” from CJ’s fog machines.

CJ passed away at the age of 27 in 2006. In 2007, Frank established The CJ Memorial Foundation to honor the life of his son and raise funds and awareness for individuals with developmental or physical disabilities and the first CJ Memorial Golf Tournament, benefitting KETCH, Ability Point, Rainbows, and Free Spirits of Derby, was held at the Derby Golf Country Club.

CJ’s spirit is shared throughout the Tournament. Sponsorship levels are Tornado, Lightning, Thunder, and Storm Sponsors, and The CJ Memorial logo is based upon the cover of his favorite Journey album. Since the inaugural event, the tournament has raised over $423,000 to benefit organizations who serve individuals with special needs.