His family sees the value of early intervention. 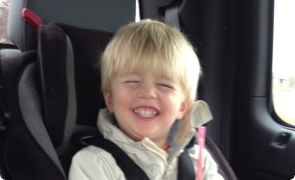 “There was the temptation to ignore getting early intervention,” said Brandy, mother of toddler, Ethan. For Brandy and her husband, it wasn’t running away from the label of having a child with special needs, they just didn’t realize all of the benefits that can come from services like speech and occupational therapy.

After moving to Whitewater, Kan. from Oklahoma, with hesitation, the family decided to have Ethan evaluated. He was around 15 months, rarely saying “mama” or “dada” and not pulling up to stand or walk.  Staff at Rainbows’ Bright Beginnings in Butler County evaluated Ethan for Infant/Toddler Services. Soon after that, speech language pathologist, Kim, started visiting him regularly.

“They have a really sweet relationship, which wasn’t the case at first,” said Brandy. “For 4-6 weeks he didn’t look at, play with or pay any attention to her. Then all of a sudden several months later, he opened the door and said ‘Hi, Kim!’“ Ethan has made a lot of progress, in part because Kim brings Brandy educational packets to work on with him throughout the week, so he is always learning while focusing on specific objectives.

The fact that Rainbows’ staff members travel to the family’s home for services is such a convenience for Brandy and Ethan is more comfortable at home, too. Kim was able to incorporate his surroundings and interests into the visits. After one year of services, Ethan is on track with speech and his personality has really blossomed. “He has honestly gone from being totally placid, wouldn’t interact with others or talk, to the jokester…” said Brandy.

“I would just say that as a mom, Rainbows is really supportive to me. Your mind just goes to places it shouldn’t when one hears of his/her child being diagnosed as ‘delayed,’“said Brandy. Kim gave her a plan and a process, and Brandy can see the value of early intervention for her son, Ethan.