Continues to progress and grow 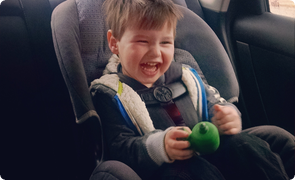 Two and a half year old Greyson Rutherford is currently receiving Rainbows’ early intervention therapies  for speech delay and sensory sensitivity. “It appears that our son may have high functioning Autism,” said Greyson’s mother, Katie. Greyson shows many of the symptoms, indicators, and tendencies of a child with Austism.

According to Katie, Greyson started regressing developmentally right before his second birthday. “We only heard him say mom or dad once, and then he didn’t try again,” she remembers. Greyson became hyper focused on parts of toys, overwhelmed by crowds, and needed soft items and deep pressure to calm down. “Grey couldn’t communicate his needs. He would just cry, scream, screech and grunt,” Katie said. “He started to chew on everything, spit, run in circles, and would not play with anyone.”

Finding Rainbows in November 2015 has helped ease some of the Rutherford family’s worry surrounding Greyson’s symptoms. “I work in early childhood and know the signs and symptoms, but I felt scared,” said Katie. “It was my kid this time who needed help and the things I knew weren’t working. Rainbows has helped us so much.” Greyson’s mom is happy to report that he is making some huge strides towards developmental and social goals. Greyson has started saying family members’ names, like Momma, Poppa and Dada. He has stopped chewing on toys and other objects and is learning to communicate in a number of ways. “Grey now brings his me his cup when it’s empty, and will say or sign the word ‘more’ letting me know his need. He will say ‘again’ while playing appropriately with toys to let us know he wants to continue and he will even sit in our laps, make eye contact and give a kiss. Before, his eye contact lasted less than five seconds. He has grown so much,” said Katie.

Rainbows’ Infant Toddler Services Occupational Therapist from Butler County, Kara Knight, has been Greyson’s therapist since he began services. “We have been focusing on playing with toys appropriately and functionally, joint attention, sensory play, and language development,” Kara said. Kara has also taught Greyson’s parents how to effectively redirect his actions. For example, now when he wants to shake a toy, he will only go shake the leash on his stuffed puppy instead. Additionally, if he experiences sensory overload, he will now go to his room and cuddle with his soft blankets and make a nest.

The Rutherford family is thankful for Kara and the support she has provided their family. “Grey looks forward to the visits! She has been able to really connect with him,” Katie said. “I’ve also been able to connect with Kara, on a personal and professional level.” Being in education, Katie’s work often refers families to Rainbows, but this was her first personal experience with the organization. “We’ve really felt at ease,” she said. “When I haven’t been able to be there for a visit I’ve still been able to call Kara and discuss Grey’s progress.”

As he continues to progress and grow, his family awaits an official diagnosis for Greyson. “In two to three months, we can finally go to the developmental pediatrician,” said Katie. “We are ready to hear the official diagnosis for Grey. We want to help him succeed and with that knowledge, we can better provide for his needs.” No matter the diagnosis Greyson receives, his parents want him to always feel like everyone else. “It doesn’t matter what diagnosis is given. It doesn’t mean something is wrong with our son; he doesn’t need to be fixed,” his mother said. “Our family just needs to work together to learn how to do things differently for Greyson.”