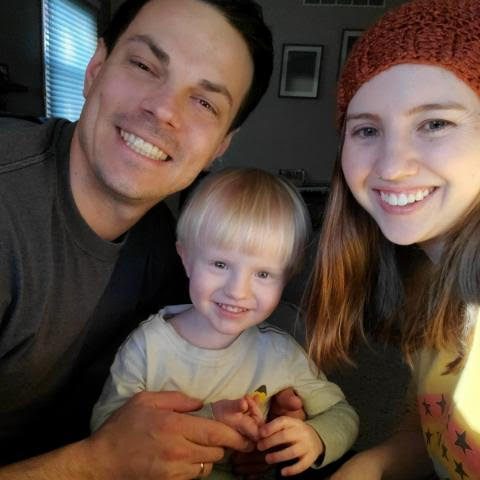 At 6-months-old Jack, who was born 8 weeks early due to preeclampsia complications, was developmentally behind. After a referral from his doctor, the family got connected to Rainbows.

For the next 2 ½ years, Jack received home or tele therapy visits with Diane Porter, Occupational Therapy Assistant. Diane saw Jack onscreen with his mom, Christina while she was working at the Rose Hill Library. Jack gets excited when the train goes by or someone comes into the library. He loves his toys especially his balls and books, and even knows where his favorite books are.

Jack is sweet, always giving hugs and cuddles to everyone he meets. He is active, always with a passion for golf or any sport. “Jack is a future golf pro,” laughed Diane. “He can hit his plastic golf ball with his club accurately and with skill. He was ready to share his toys with me during visits and had ideas on what we would do during the visits. His parents, Christina and John, came up with the joint plan and had great follow-through with implementing and trying it during the week.”

Jack was sensitive to sounds, especially when in large family gatherings. Diane worked with the family to develop strategies to help him be successful such as shorter visit times and quieter areas. He was on reflux medications and disliked his tummy time and playing on the floor, but with persistence and commitment from his parents, he worked through it and began sitting and crawling a couple of months after starting services. Jack was motivated to move and went into pulling up at his mom and wanting to stand. “The tools and support that Rainbows provided us gave my whole family peace and confidence that we are doing enough. Now we are thriving,” said Christina.

Jack didn’t talk until he was almost 2 ½-years-old, but he has always been able to love and play. “Jack was quiet and we tried sign language with him so that he could let others know what he wanted,” said Diane. “He started by making some sounds such as when the rocket took off. He would point to get attention and do lots of grunting. We worked on animal sounds, car sounds, etc. while playing with his toys.”

Another team member, Laura Ramos, Speech and Language Pathologist, joined the visits. In just a couple short months, Jack was doing actions to songs and had started using his voice. He had lots of opportunities to play with toys at the library and find books that he really responded to. Jack found his voice. He ended services using 5-6 word phrases and retelling his favorite story while sitting in his mom’s lap.

The family also worked with Alice Boutz, Mental Health Specialist, to manage tantrums and help Jack with self-regulation. “Working with Jack and Christina was a joy,” said Alice. “I was able to do virtual sessions with Christina while she was on her break at work.”

“Christina was always eager to learn new techniques and skills to help teach and model for Jack how to better regulate his emotions,” said Alice. “She was always actively engaged in sessions and would openly share what was working and what wasn’t working with Jack. This is a great example of the root of our services, coaching parents. I was able to coach Christina with not only what was working and what to try next, but we were also able to problem solve together on how to try interventions a little bit differently if they didn’t work the first week.”

“Diane, Laura and Alice are phenomenal,” said Christina. “They are informative, patient, kind and caring people who I am extremely grateful to have met and worked with as I became a mother for the first time.”

“It is not just the improvement I have seen in Jack, but the improvement I have seen in myself and my role as his mommy,” said Christina. “I have more patience, understanding and most importantly confidence. Jack has tested above average on a lot of skills now and his self-regulation has improved. Rainbows is incredibly resourceful with caring and knowledgeable staff. I am always sharing our story with others.”

“My husband and I struggled at first to start a family and Jack has completed our family,” said Christina. The family has two small dogs, loves to take walks to a park near their house, ride bikes in the neighborhood and play with puzzles and Hot Wheels.