Going out in public was not an easy task. 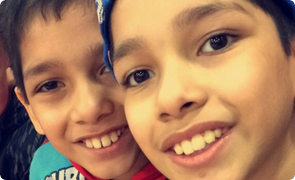 Ten year old twins Jaden and Elijah Gonzalez have been with Rainbows since they were two. “I contacted Rainbows with a referral from a physician. Rainbows helped me find our current doctor, who in return, gave us the Autism diagnoses,” said the twins mother, Mary. Both Jaden and Elijah have been diagnosed with Autism and ADHD. Although Jaden’s Autism is less severe, both boys receive services through Rainbows. Before coming to Rainbows, both boys were nonverbal and were high elopement risks. However, their family has since seen incredible improvements. “After starting services, their vocabularies have exploded,” said their mother. The twins are both in fourth grade now. Jaden is in a regular education classroom with support and Elijah is currently in a structured classroom with children ranging from third to fifth grade. Elijah is now able to control his urge to run off. “He is rarely a flight risk now,” Mary said. “He hasn’t eloped from our house in over three years and does very well when going out in public.”

Prior to Rainbows’ services, going in public was not an easy task and one that the boys’ mother hardly ever attempted. “We were essentially stuck in our own home,” said Mary. “I was too afraid to take the boys anywhere in public for fear of them running away or getting hurt. Not to mention the stares we would get from others.”  However, that is no longer reality. Now, they are capable of going out into public without running away and according to their mother, have adapted well to going out to eat, traveling, vacationing, and going to sensory movies. Mary credits this progress in large part to Rainbows. “We’ve learned as a family the tools we need to handle any behaviors or over stimulations as we go. Before, we didn’t have the knowledge to handle these situations so we stayed at home literally 24 hours a day.”

The Gonzalez family is thankful to have Rainbows as a resource. “Rainbows is the reason our entire life has changed,” Mary said. “Without Rainbows, we may have received a diagnosis too late to start early intervention services.”  Early intervention services are extremely crucial in the development of children with Autism like the twins. Rainbows provided Autism Waiver services for both Jaden and Elijah. The Kansas Autism Waiver is a service provided through Kansas Social Rehabilitation Services for children from the age of diagnosis through the age of five. If eligible, the child and family may receive Waiver services for a time period of three years. The waiver is designed to provide intensive early intervention services to children with ASD. Services include respite care, parent support and training, intensive individual supports, consultative clinical and therapeutic services, and family adjustment. Jaden and Elijah were accepted into the Waiver just two months before their sixth birthday. “We barely made it!” remembers Mary. However, due to all their improvement, the Autism Waiver lasted four years for the Gonzalez boys, instead of only three. “What many people may not know is that you can apply for a fourth year if you can show that the child has made significant progress with the help of the Waiver and that more progress could be gained with an additional year,” said Mary. “We applied for that fourth year and were grateful to receive it.”  The Autism Waiver concluded for Jaden and Elijah in October 2015. “We had amazing workers who were with us thanks to Rainbows. They are phenomenal and irreplaceable!”

Today, both Jaden and Elijah are continuing to reach goals and master social interactions. According to Mary, they have great eye contact and love to be consoled by touch and hugs. “They are sweet, affectionate, caring boys who are genuinely remorseful when they feel like they have hurt someone’s feelings. They are also technologically savvy and are great in math,” she said. Currently, the family is receiving Intellectual/Developmental Disability (IDD) services through Rainbows and has DeAge’a Banks as their Targeted Case Manager. “Jaden and Elijah’s transition from the Autism Waiver to the IDD Waiver has been smooth,” said DeAge’a. “It is my pleasure to work with such bright, young men!”  Through the IDD Waiver, the family also receives in-home support. As a result of their multiple services, the Gonzalez family says they have learned how to function better as a whole. “Rainbows has been a Godsend for my family and our well being as an entire unit,” Mary said.  “If someone is ever looking for help in the right direction, I always give them Rainbows’ number.”