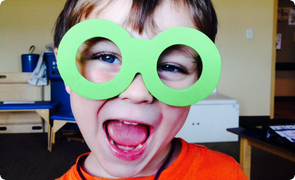 Four year old Liam is a bright, talkative boy. Greeting strangers and asking questions of anyone and everyone he meets, you would never guess that a year ago Liam could not communicate.

At a young age, Liam’s parents learned that he was developmentally delayed. It was recommended that they look into Rainbows’Infant/Toddler Services.

“After a tour at Kids’ Point, we knew immediately we wanted him to be there,” Courtney, Liam’s mother, said.

Liam received Infant/Toddler Services speech therapy as well as mental health services for behavior when he was younger. Therapists used a choice board with Liam to help him understand words and learn to communicate.  When Liam began attending Kids’ Point childcare, Wichita State University therapists visited him there to continue his speech therapy.

Rainbows’ Mental Health staff stepped in to provide coaching and even accompanied the family to the grocery store to teach them what to do. As Liam developed further, there were signs that led his parents, Courtney and Kevin, to take Liam for more evaluation and he was diagnosed with Autism.

“WSU and Rainbows helped us make it through,” Courtney said. “They were there the entire time.”

Liam is a friendly, happy child who enjoys life, even more so now that he can talk, according to his mother. Courtney looks forward to Christmas this year because this will be the first year Liam is able to understand what words like Christmas and Santa mean.

“My child is a completely different child,” Courtney said. “Rainbows changed our life. I have no idea where we would be without them. Everyone has been so helpful to get Liam where he is today, I can’t thank everyone enough.”