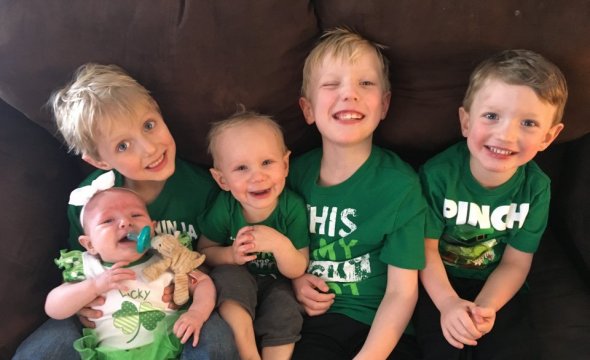 “I am Morgan Moore, a busy mom in a family of seven! I have four sons and one daughter. We do lots of activities at the YMCA and are often on the go. We love being outside and just being together.

My youngest son, Michael, is almost two years old. At 15 months old, Michael could not sit up on his own, crawl, self-play, self-feed, or stand up by himself. He could roll over and army crawl, and that was the extent of his movements. We got connected with Rainbows and began receiving services in hopes of helping Michael reach these important milestones. The first six months, Michael participated in occupational therapy and is now receiving speech therapy.

Through Rainbows, Michael has worked specifically with Kara Knight, Occupational Therapist, and Kim Stewart, Speech-Language Pathologist. After only a couple appointments with Kara, Michael started making huge improvements. I mean, he was making so much progress that when people would comment on how well he was doing, I would tell them that Rainbows was “magic”! That was the only explanation. After those initial six months, Michael was walking independently, climbing up chairs, eating finger food, self-playing, and he even started running around with his three older brothers!

Michael, at nearly two, is still not talking hence the need for speech therapy. We have been receiving speech services with Kim for about two months now, and again I am seeing amazing progress. Michael has gone from almost no communication outside of crying or screaming, to being able to bring me things he wants or needs help with, responding to questions like “Do you want a drink?”, and other forms of non-verbal communication. This shows an obvious advancement in his cognitive ability and speech and language skills.

Before we started Rainbows we were all so miserable and discouraged. Michael was extremely frustrated and would cry constantly unless he was being held. Now that he is catching up and gaining some independence, he is an extremely happy and confident boy! Michael is sweet, loving, and extremely social. He loves to snuggle and play. Having the ability to play and be more independent has made the biggest difference for him

Rainbows’ staff are first-rate, phenomenal, caring people. They know their ”stuff” and make astute, insightful observations about your child. I couldn’t ask for better people to come along side my little guy and help him grow. I have learned so much as well!”