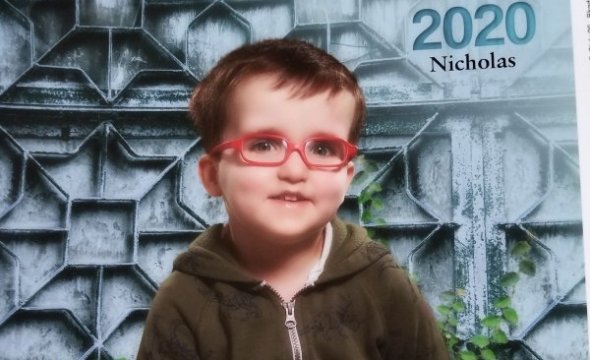 It’s the holiday season and almost 5-year-old Nicholas Alexander Kruse is going to Botanica to see the lights at Christmas.  Lights were Nicholas’ first favorite thing and the trip to Botanica is now a family tradition.

Nicholas’ communication is non-verbal and he has been diagnosed with Autism. As a young boy, Nicholas has other diagnosis that create challenges as he learns and grows. A genetic variation resulting in developmental delays and a potential for higher risk for certain cancers; Macrocephay, large head; and sensory issues with food and textures are some of the ongoing challenges for Nicholas.

The family’s first contact with Rainbows came when Nicholas started speech therapy with Mindy Brockmeyer, Rainbows’ early childhood special education teacher, while attending daycare.  “Mindy was a great help to us and supported us through his first evaluations with the school district and when we first got his Autism diagnosis as Nicholas was turning 2,” said Brandy, Nicholas’ mom.  “She let us know that Rainbows had a daycare on-site and we put him on the waitlist shortly thereafter.”

Nicholas attends the early childcare and education program at Rainbows and receives intensive Autism therapy in the afternoons.

“Nicholas is a kid that brings out every adult’s inner child,” said Ms. Robin, Lead Teacher in Room 7 at Rainbows’ Kids’ Point. “He loves to dance with his teachers. Nicholas always is down for a challenging race to the playground (somehow he ALWAYS wins)! Lately, Nicholas has been teaching US all about shapes. We love his positive spirit and his sweet laugh that we are lucky enough to hear every single day.”

“We have seen amazing progress since Nicholas started at Rainbows,” said Brandy.  “The Autism team has helped him tremendously with learning processes and visual schedules.  He is working on pre-writing skills and last week he drew identifiable circles and squares with Nora.”

“This charmer has an infectious giggle and dimples to go with it,” said Nora Wilson, Behavior Technician. “He’s interested in the refraction of light, every shape imaginable, and ‘shaking it’ to his favorite songs. He’s an adventurous little guy who doesn’t hesitate to go down the slide head first, and he’s humble enough to sit himself out if he thinks he’s made a poor choice. His personality is bigger than he is, that’s for sure, and he’s an absolute joy to work with.”

When Nicholas began at Rainbows, he was very isolated from his peers and had frequent meltdowns when asked to move from one activity to the next.  He now has the visual schedule that helps him understand what needs to happen next and meltdowns are no longer the norm.

Nicholas has begun to interact with the other kids in his class and has friends he likes to play with.  At age 2, Nicholas wouldn’t walk on grass.  Now he will run to the playground and go head-first down a slide.  “We have to dump sand out of his shoes every night, which is GREAT!” said Brandy.

“Nicholas was always an extremely quiet baby,” said Brandy.  “In the past few months Nicholas has made great strides in communication at home and is vocalizing so much more.  He likes to come home and watch YouTube videos of the ABC’s and phonics and practices singing them back to the tablet.  He’s starting to say words that we can distinguish.  And he’s starting to acknowledge people and say ‘Bye’ when he leaves.”

Both Mom and Dad have been Essential Workers through the entire Covid-19 situation.

“Karl and I both had to work during the entire Stay at Home Order and I have no idea how we would have managed if it weren’t for Rainbows,” said Brandy.  “I seriously can’t even tell you how many times I have sung Rainbows praises in the past few months when people ask me how Nicholas is doing with change and stress during this crazy year.  I can honestly tell them he was buffered almost completely by Rainbows staying open.  He isn’t experiencing the same distress that many Autistic kids are facing because he was able to keep a big chunk of his routine and stay with safe, familiar people.”

Nicholas sees quite a few specialists and every doctor’s visit was a battle.  He fought every step of the visit from sitting or standing on the scale to letting a doctor come near him.  Last month, for the first time ever, he walked into the dietitian’s office and stepped right up on the scale with no problem.

In the past weeks Nicholas has played with TheraPutty and then he played with the slime they made in class for the first time.  This time last year, Nicholas would have a complete meltdown if you presented him with play doh or slime or just about any unknown substance you wanted him to touch with his hands.

These are tiny things to most people, but they are giant steps in the life of this little man!

“Rainbows has been so great for Nicholas,” said Brandy.  “We have seen so much progress since he started and have never worried about the quality of care he receives in the Rainbows classroom.  I have seen the classroom teachers handle some truly challenging situations with calm and grace.”

“The Rainbows’ staff is excellent,” she added.  “We have full confidence in the Teachers and Therapists at Rainbows.  Ms. Maria says ‘Hello Nicholas’ every morning as he walks in.  His classroom teachers and sometimes the neighboring classroom teachers cheer his name as he comes down the hall and into his room in the morning.  He has super fun in the sensory room every day.  And then Ms. Rebecca gets a high five or sometimes a ‘Bye’ as we leave.  We could not ask for friendlier or more considerate people to be taking care of our child every day.”

Nicholas gets his affinity for computers from Dad.  He can work an Android tablet and an iPad better than most of the adults he knows.  Karl is an IT Director and they share the same kind of logical approach to life.  Nicholas and Dad go on adventures on the weekend where they meander and visit stores and people watch.

Mom is a bookstore manager and likes to pester Nicholas with stories that come in hard copy.  “We like to sit outside and blow bubbles and listen to birds,” said Brandy.  “We do a lot of writing out the ABC’s, numbers 1-100 and drawing all the shapes we can think of with sidewalk chalk. Sometimes Nicholas is feeling brave and decides to try out the tricycle while he surveys his sidewalk chalk art exhibits.  We sing a lot of songs about shapes and numbers.  We like to go to the Zoo and sometimes we walk around the Great Plains Nature Center.”

Nicholas loves light and colors and shapes and numbers.  He loves bubbles and shamelessly uses his dimples to get the teachers to run the bubble machine.  His favorite show is Word Party and he sleeps with Bailey the Elephant every night.  “Although Nicholas is Non-Verbal, he still manages to sass his teachers and sometimes his Mom and Dad!” laughed Brandy. “Despite his many challenges, he is a very smart and funny little guy and we have high hopes for his future.”