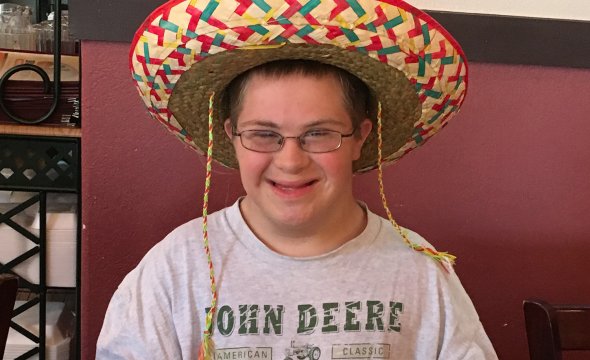 Noah Crosby has been with Rainbows for almost his entire life. Diagnosed with Down Syndrome at birth, Noah began receiving in-home early childhood intervention services at 6 months. At the age of 3, he enjoyed Rainbows’ preschool and child care at Kids’ Cove until he graduated at 5. During his elementary and middle school years he attended before and after school latchkey programs. “Noah loves being at Rainbows, he especially loves attending Camp Woodchuck and directing the Rainbows’ choir,” said Michael, Noah’s dad.

Today, Noah is 16 years old and lives with his father Mike, mother Rachael and 12-year-old brother, Nash. Not only at Camp is Noah involved, but also at home and outside of Camp where he joyfully sings, dances, and plays sports with his family and friends. In the AYSO VIP Soccer League and North High School, Noah shines on the field when he plays soccer and basketball. Baseball has also been a great part of his life. Last summer, he got to throw the first pitch at a Wichita Wingnuts game, a special highlight for him. Noah loves going to his little brother’s baseball games and cheering him on. In recognition of his support and dedication, Nash’s team, the Wichita Heat, has adopted Noah as their Big Brother and honorary teammate.

Noah has taken on a couple of jobs through the community-based school program, including working at the Westlink Library and Copper Oven Restaurant. At home, he takes initiative when it comes to taking care of his house and family. “He helps with laundry, dishes, and takes out the trash without being asked to do so,” Michael explains.

Noah’s family is grateful for Noah and sees lots of potential in him as he is growing up to be an adult. “Noah is developing into a thoughtful, caring, responsible, individual who very much wants to be included in activities of daily life like his typical peers,” his father said, “It is almost impossible to not form a friendship with him because he is determined to be your friend.” He is loved by everyone around him and is not shy to give a big hug and put smiles on peoples’ faces. “We love having Noah in our room at Camp Woodchuck because he always knows how to brighten our day,” said Parker, the classroom lead.  “We will continue to enjoy the liveliness Noah brings and belt out songs cheerfully as he conducts the choir.”