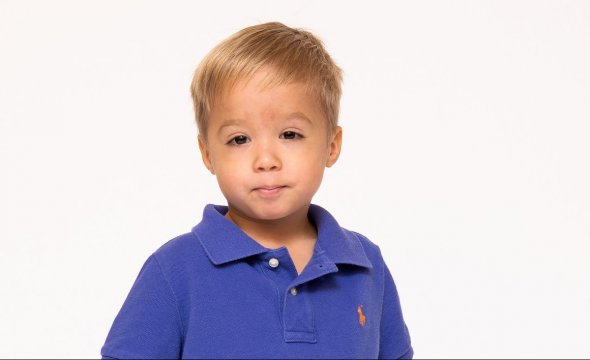 Three-year-old Samuel Haines is known for his high fives, knuckle bumps and hugs. “Even when he is in the hospital, Sam will high five the doctors and nurses and steal everyone’s hearts,” said Heather, Sam’s mom. “He is happy and outgoing and spreads love wherever he goes.”

Sam has Spina Bifida, Hydrocephelus, Chiari Malformation 2 and Intermittent Exotropia. Heather adopted Sam at birth. “His condition was undiagnosed, so it was a shock,” she said. “Sam began receiving physical therapy services through Rainbows right away. Ms. Jamee, Sam’s physical therapist, was a great resource for me. She helped me understand what issues might be related to Spina Bifida and reassured me he was developing as he should. Our PT services during Sam’s first year helped relieve so much anxiety about his condition. Jamee’s experience with other kids with Spina Bifida and her calm nature were just what we needed.”

“Ms. Nicole, Sam’s Speech Language Pathologist, changed Sam’s life completely when she identified a hearing issue,” said Heather. “I can’t imagine how far behind his speech would have been if we had waited any longer to address his hearing. His speech improved by leaps and bounds after tubes were placed in his ears and his adenoids were removed. As his speech caught up with his peers, she helped us with feeding issues related to his Chiari Malformation.”

Finding child care for a child with special needs can be a challenge, but Heather and Sam were already part of the Rainbows’ family and knew the quality of Rainbows’ services. Heather chose Kids’ Point Early Care and Education for child care because she wanted Sam to be in a center with a nurse and staff who were used to working with kids who have special needs. “It was important for there to be flexibility regarding his learning to walk (one-year-old classroom) and potty training (3-year-old classroom) because kids with Spina Bifida often have bladder and bowel issues,” said Heather.

“I wanted Sam to be around children with special needs different than his own,” said Heather. “We had no idea how he would develop and he may still need braces or a walker as his skeleton grows. I wanted him to know kids who had ‘tools’ to use and are just the same as he is. I love the inclusive spirit of Rainbows. The fact that Kids’ Point is available in our community is a blessing to us.”

“The Rainbows’ Early Childhood staff is knowledgeable and responsive to the kids’ and parents’ needs,” said Heather. When Sam went through a normal “biting stage”, the teachers at Rainbows were able to address the biting responses with a personalized strategy. “Sam has amazing language skills,” said Michelle Croomes, Early Care and Education + CBETS Coordinator. “We relied on his ability to understand how his actions were hurting others and also to hold him accountable for using his words with friends. We then added charting and positive behavior reinforcements to work through the issue. His mother and teachers kept communication lines open to make sure that everyone was doing the same things consistently.”

“This child brings joy to all who know him. He has a contagious smile and awesome sense of humor. His condition is only going to be a minor bump in the road in his story,” said Nicole. “He also has the best family and support system rooting for him!”