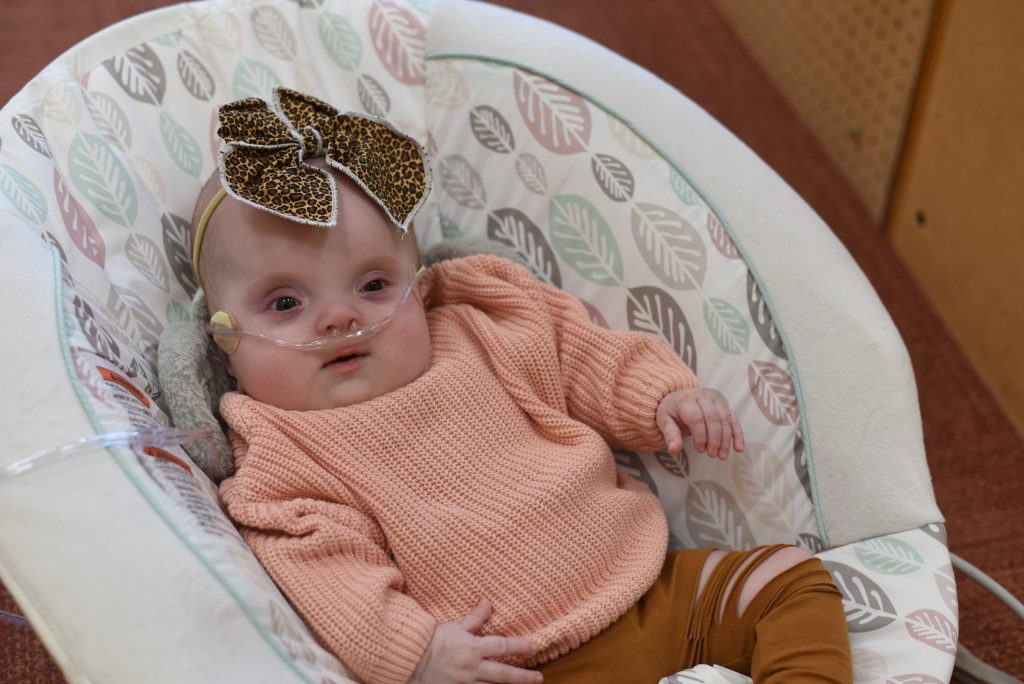 “Our goal for Sophia is for her know how wonderfully made she is,” said Taylor, Sophia’s mother. Sophia has a very complex and unique medical diagnosis of unbalanced translocation of chromosomes. She has 100 extra Chromosome 7, and 6 deleted from Chromosome 9. She is the only one in medical history to have this mix of Chromosomes.

After she was born, Sophia was in the NICU at Children’s Mercy Hospital for 4 months. “We had doctors tell us she may never be able to breathe on her own, let alone come to our home,” said Taylor. At the young age of 7 ½ -months, Sophia has already had 5 surgeries.

The family got connected with Rainbows through their social worker at Children’s Mercy Hospital. Taylor and Anthony, Sophia’s father had also heard how great Rainbows was from their community. Sophia receives physical therapy, occupational therapy, and speech therapy for feeding.

Rhonda Davis, Physical Therapist, sees Sophia once a week. As a result of the physical therapy, Sophia has been able to sit assisted, has reached for and played with toys, and has even rolled a few times. “Rhonda has helped Sophia make huge gains with her head control,” said Taylor. “Sophia has already met so many milestones with the help of Rainbows.”

“Taylor and Anthony are super sweet,” said Rhonda. “I was able to do in-home visits a couple of times before Mom had to go back to work and then I started seeing Sophia at Kids’ Point in the nursery. She’s always a chatterbox and usually very smiley when we work. She will fuss at times when I am stretching her, but quickly gets over it when I distract her or when the stretching is done. She has made good gains with her head control and her sitting skills over the past month, despite being in the hospital. She has a beautiful smile and loves the one-on-one attention during our sessions. She really enjoys sitting up where she can better see her surroundings.”

Anthony is a field engineer and travels, and Taylor is a teacher. Due to all the extra needs Sophia has, including G-tube feeding and oxygen requirements, she could not attend a home daycare. Taylor and Anthony decided Rainbows was the best place for Sophia for care during the day.

“Rainbows has been our saving grace,” said Taylor. “They were the only one who could take our daughter and provide all the therapies and care she needs. Although Sophia has so many challenges, everyone at Rainbows has accepted her for her! Every person I see each day knows our daughter by name. To me that makes me know what a special place Rainbows is.”

After attending Rainbows for a few weeks, Sophia’s big personality came out. She began to make new noises and find humor in things. Sophia is now working on drinking from a bottle. “We practice with the bottle for about 10 minutes before hooking up to the G-tube,” said Stefanie Loubert, Lead Teacher in the Infant Room. “She likes to play around with the bottle in her mouth and smile and laugh. She also has times of the day that she must be on oxygen. It’s an easy task though. We are also helping her with tummy time, rolling to her side and head/neck control.”

Sophia was recently in the hospital and Stefanie checked in with the family multiple times in the 2 weeks they were gone. That meant so much to the family. “Rainbows has allowed Sophia to feel loved by many,” said Taylor. “Everyone in her infant room is loved by Sophia. The joy on Sophia’s face when she comes in every morning is the best feeling.”

The family is a huge fan of music. Sophia loves all types, especially when daddy is singing. They all love to be silly and dance together. The family enjoys spending time outside where Sophia’s favorite thing is hearing the roosters in their neighborhood. One of their Saturday rituals is to go have breakfast at a new place, and then spend time outside, listening to Sophia’s roosters!