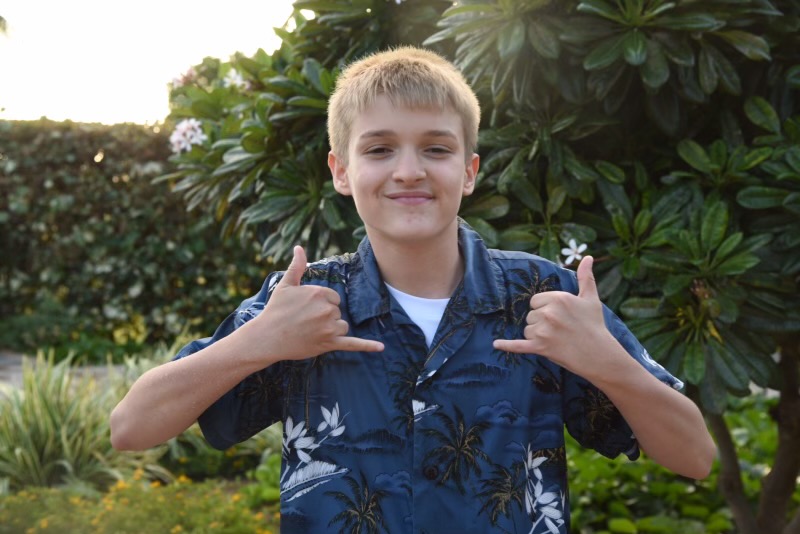 Twelve years ago, 2-year-old Zane was referred to Rainbows in Butler County with developmental delays, including speech delay and hearing impairment. Zane’s day care provider had just taken a class for continued education for her day care license and had learned about children’s behaviors and the causes, and she thought by watching him and paying close attention, that he might have a hearing problem. She referred Zane to Rainbows.

“There were no waiting lists and no delay in care due to ability to pay,” said Darla, Zane’s mom. “The staff were kind and patient and provided great education for me to be able to help my son as well as doing a great job of working with him on his level. I never felt that I was judged in any way by the staff. There was no embarrassment over what I could or could not pay for. They were very genuine with the care, support, and encouragement they provided to my son and to me.”

Zane received speech therapy with Kim Stewart, Speech and Language Pathologist, and Audiology services. “Kim was always so sweet and patient with him and she could understand his language better than I could,” said Darla. “She had a great rapport with him. She would color with him and talk to him and get him to talk to her while they colored and other such things to gain his cooperation. He was always happy to see her. It was really helpful that she came to our house where he was most comfortable and it was a lot easier for me than getting him out to appointments.”

“Kim also had a little machine she would bring that would test the flexibility in this ear drum and compare readings to other visits,” said Darla. “That really helped us to figure out that it was his hearing that was significantly impacting his speech and his behavior.”

Rainbows’ Audiologist worked with Zane, teaching him how to do what she needed him to do so that she could do the needed testing, and then referred him to an ENT surgeon. When Zane was 2 years old, he had surgery to correct the problem that was causing his hearing impairment.

With the combination of speech therapy and surgery to correct his hearing impairment, Zane’s behaviors improved and he became more playful with other children, started speaking more, and learned some basic sign language to help him communicate his needs so that he would not get so frustrated.

“If we hadn’t started with Rainbows when we did, he would not have received the treatment he needed as soon as he got it,” said Darla. “The earlier in life that you can correct hearing and speech issues, the better the chance for the child to have a normal life and do well with school, personal relationships, home life, safe behaviors, etc. It really helps a child’s life, for the rest of their life!”

After his hearing was corrected and he had improved quite a bit, Zane was attending Early Childhood Development at Skelly Elementary and there still were areas that he was really struggling in. After more testing, Zane was diagnosed with Autism. With the diagnosis, Darla was able to get Zane into the right therapies quickly and achieve a high level of success in improving his level of function. Zane is now in 8th grade and in most of the general classes with his peers and he is a highly functioning teenager with Autism. He does still have disabilities such as a delayed time for his brain and his eyes to process information but is always making improvements.

Zane is in band and plays the flute. He enjoys playing video games and card games with family and friends. He’s actually very good at those! He also is a Boy Scout and enjoys going camping and all the fun stuff they learn how to do. People who have seen him grow up over the years are amazed at the progress he has achieved.

Zane is an only child but the family does have 2 dogs who are treated like family. They enjoy taking vacations together, camping, fishing, going to movies, visiting Dave and Busters, spending time with other family members, and playing with their dogs.