You fall in love with her instantly. 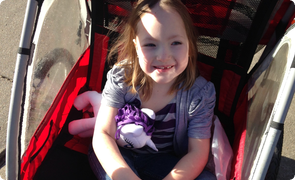 Josh knows he is not alone in the fight to securing a bright future for his six year old daughter Zoe. Zoe has Spina Bifida, Hydrocephalus, and clubbed feet. Josh recently sought out Rainbows’ Targeted Case Management (TCM) services and has been working with Targeted Case Manager Lia Hampel for a few months.

Already, Josh describes his family’s relationship with Lia as “freaking awesome.” Through TCM services, Zoe is now approved for Home and Community Based Services (HCBS) hours. This will ensure Zoe is properly cared for when Josh is not in the home.

“For now, services consist of advising and helping me as well as advancing Zoe’s care,” Josh said. “She is a totally awesome and beautiful little girl that can make anyone fall in love with her instantly. She is an amazing, perfect mess!”

Zoe has had many surgeries including a back closure shortly after birth and several heel chord releases. In February, she will undergo another procedure with the hope that she will be able to walk straight. “It’s scary,” Josh said. “But nothing was scarier than finding out what she would be born with.”

During an ultrasound, it was discovered that Zoe would have special needs. Josh and Zoe’s mother made the decision to proceed with having their baby. “You want your child to be healthy,” Josh said. “It takes a strong parent to accept that your child is going to be born exactly the way they are.”

When describing what it is like to be a special needs parent Josh quotes My Little Pony Pinky Pie, “you’re nervous, scared and excited all at once,” but Josh wouldn’t change anything about his daughter. “If she wasn’t a special needs kid she wouldn’t be as amazing as she is,” said Josh. “Pain in the butt and all.”

Lia experienced the instantaneous effect of Zoe’s charm the first time they met. Zoe drew a picture of Lia and her holding hands. “I still have it hanging on my office wall,” Lia said. “She is a sweet girl with so much energy.”

“Rainbows really does care,” said Josh. “They are willing to do what is needed for their kiddos.”