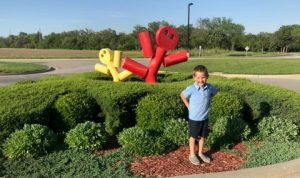 On July 18, 2019, Harrison and I walked out of Rainbows United, Inc. hand in hand for the last time. He was an undeniably different child than he was when he first entered those colorful doors almost two years earlier.

Harrison was two-and-a-half years-old when Travis and I started having serious concerns about his development. It was right after his third birthday that we sought a free screening from Rainbows. Results indicated he was *this close* to meeting the minimum levels for developmental standards for his age and we were given the choice to create an IEP and enroll him in the Early Childhood Intervention Program through Wichita Public Schools, which we did gratefully.

We also were the beneficiaries of an opening at Kids’ Point, where, for two wonderful years, Harrison was the recipient of patient instruction, skillful care and ceaseless praise. Saying good bye to our Rainbows’ family was crushing. Everyone from the receptionists to the marketing team to the teachers and paras had become family. But we knew that, because of the expert care and education he received at Rainbows, he was more than ready to tackle Kindergarten, joining his big sister at Earhart Environmental Magnet Elementary within USD 259. More than ready is actually an understatement.

Harrison grabbed Kindergarten by the horns and didn’t let go. His IEP called for both speech and occupational therapy services. Because he had two years of pre-school and two years at Rainbows under his belt, his speech services were conducted in the classroom and only as observations. He charmed all the teachers and staff with his infectious smile and unparalleled charisma. Harrison was an instant favorite. He was also a hard worker. Even when COVID-19 closed schools in March, he remained steadfast in his efforts, meeting virtually with his occupational therapist each week.

In April, Travis, Harrison and I sat down for a video conference to review his three-year IEP. After each Earhart specialist took his or her turn summarizing Harrison’s current skill levels, the tears flowed as it was recommended he exit services because he’s a rock star six-year-old and crushed every single goal. He meets or exceeds every standard for his age.

It’s been quite the journey for our Big H. Countless teachers, paras, occupational therapists, speech-language pathologists, bus drivers, front desk staff, administrative assistants, latchkey supervisors, principals, custodians and more from Rainbows, Buckner Performing Arts Magnet Elementary, Gammon Elementary and Earhart have all played a role in his success. We cannot adequately convey our appreciation to everyone who has impacted Harrison’s life, but we will continue to support these programs and schools and advocate for early intervention. It is a game changer, my friends. Harrison is proof.

PrevPreviousIn and Around Wichita or At Home
NextIf your child has a developmental delay, do not be embarrassed about it.Next