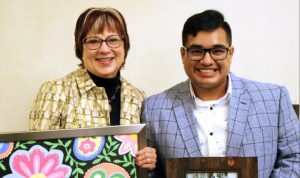 My favorite part of the entire InterHab conference is the Arts and Awards Recognition Lunch. I remember the first time I attended in 2007. It was when I realized I was part of something so much bigger than my small role as a Rainbows’ employee. I heard stories of accomplishment for adults with developmental disabilities and the heart of those who made a difference in their lives. I have been forever inspired by families who give in unique ways to support individuals with disabilities and make their lives richer, happier, and fulfilled. Each year, I am reminded that our Rainbows’ children and their families have an amazing group of individuals who advocate for their needs and make sure their voice is heard at the state and federal levels where so much impacts the services they depend on.

This year’s lunch, held Friday, October 13, was extra special since Rainbows had two winners. The Outstanding Youth Award honors an individual under 18 years old who receives children’s services and excels in the areas of outstanding personal achievement, community involvement and empowerment. This year, Rainbows submitted Isaac Flickinger for the award.

Isaac was recognized for the meeting developmental challenges head on and becoming a young adult with a bright future.

“Even though growing up has not been easy”, say Kris and Bart, his parents. “Isaac has persisted.” Isaac’s parents shared he did not arrive to his success “over-night,” but recognize it has been a journey sprinkled with teams of support along the way and hard work on the part of Isaac.

Isaac’s strengths lie within his sense to seek out key adults who serve as role models and mentors. Isaac has grown into a young man who will greet strangers in the community with a friendly hello, banter with friends and who has become a role model for his peers.

Supports for Isaac have been in place since he was an infant. Through the help of Rainbows United early intervention services, occupational therapy, childcare, mental health therapy and various other therapies, specialists and advocates in the community, he has made great strides.

Isaac dreams to one-day work in a museum and according to his parents “change the world.” He thrives on volunteer work and has a thirst for knowledge. He hopes to change the world by ending poverty, improving housing in low-income neighborhoods, helping to revitalize the great city of Wichita and organizing neighborhood cleanups. It is no doubt that with Isaac’s proven persistence, determination and willingness to succeed that he will achieve his goals and much more. The world is a better place with Isaac Flickinger and Rainbows congratulates him on this well-deserved honor.

The final presentation of the luncheon is the prestigious Mark Elmore Award for Distinguished Leadership. The award is a tribute to personal and professional integrity and statewide contributions to progressive excellence. Many leaders across the state have been surprised when their name is called as the honoree of this award. This year was no exception as Rainbows’ President Deb Voth was honored with the award.

Hale Ritchie, Board member has this to say about Deb, “Many people have worked with Deb over her 25 years at Rainbows. Nearly 97% of professional staff are female. When asked about her leadership they are quick to smile and say: She leads by example. She believes in being open and transparent. She lives by Rainbows’ Guiding Principles and was instrumental in integrating them into Rainbows’ culture.

I have learned how to work through challenges with grace because of her calm, objective example. Deb inspires me to trust the process. She believes the best in you and helps you grow. She listens. She’s a bold advocate for children and families and fights for what is right. She is someone you can trust. She leads with compassion and just the right touch of humor. Deb Voth is my Hero.  She deserves this award.”

Deb is well respected across the state and has helped form as well as serve on many state and local governing boards including tiny-k Foundation, Kansas Interagency Coordinating Council (KICC) (appointments to the Council by both Governor Haden (around 1981) and Governor Sebelius (2007), plus appointed Chair by Governor Graves in 1998), Para-Transit in South Central Kansas and Central Plains Coordinated Transit District 12, Non-Profit Chamber of Service, and Downtown Rotary. She has been instrumental in encouraging collaboration among agencies across the state in support of legislative advocacy including Advocates in Communities Team (ACT) of South Central Kansas, InterHab Board of Directors, President of Kansas Division of Early Childhood (KDEC) and Region 6 Kansas Association of Special Education Administrators.

Always the voice of children, Deb often speaks out on issues that impact the state’s youngest citizens. She has a vast knowledge of funding steams and policymaking at the federal, state and local levels. She has built relationships with many across the state as she continues to work tirelessly on behalf of children and families.

And there you have it, my eyes tear up reliving the celebration, the Inspiration, Passion and Accomplishment. I can’t wait for you to see the videos and see for yourself.

By Michelle Eastman, Vice President of Marketing and Communications