Rainbows changed the future for our baby girl 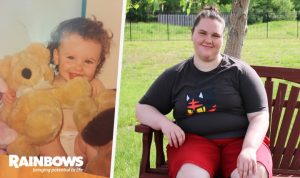 Non-verbal and with no social skills, 2 ½ year old Macayla Davis joined the Rainbows’ family within a month after being diagnosed with autism. Macayla is now almost 19 years old, a high school graduate, working part-time at Goodwill Industries, and considering enrolling in online college classes for the fall.

Macayla entered a pilot program classroom at Rainbows, and the socialization immediately began. Now, Macayla has great social skills and is very outgoing, both of which are fairly uncommon in persons with autism.  Macayla’s teachers taught both Macayla and her mother sign language, and Macayla was so thrilled at being able to communicate that she learned to verbally speak by the end of the year.

“Rainbows’ staff and this entire organization changed the future for our baby girl,” praised Macayla’s mom, Roxann. “We attribute all the successful attributes of Macayla to the help that we have received from the staff at Rainbows.”

After Macayla had been with Rainbows for a year, Roxann was able to go back to work outside the home. “Rainbows stuck with us through thick and thin since the time that she was 2 ½ years to now,” said Roxann.  “They gave us unwavering help when we needed it.”

Because of her experience with Rainbows at such an early age, Macayla advanced and moved from her elementary specialized classrooms to a “classroom within a classroom” at North High School. In order to graduate, she completed her senior project and graduated with her North High Class of 2017.

Macayla is also a talented artist, a live theater actor, a history buff, and 100% a computer geek. She loves to animate projects and is active on social media with her own Facebook page. She enjoys visiting Cowtown and the Renaissance Festival, and recently took a trip to Kansas City to attend a CosPlay convention with a friend. “The weekend was so much fun,” grinned Macayla. She proudly shared that she earned the money through her job at Goodwill for her hotel room and the tickets to the convention.

Macayla’s true passion is definitely theater.  In high school, she worked backstage and also performed in drama class plays. “That was a huge turning point for her,” explained Roxann. “It was a huge coming out point for her confidence.” Today, Macayla is an active member of The Laughing Feet Performers and starred as one of the main roles of “Princess Peach” in 2016’s production of Laughing Feet’s fall production. She has also performed for the past two years at Laughing Feet’s “Laughing with the Stars” in February and with Laughing Feet at River Festival.

“When things didn’t look very promising for Macayla, Rainbows found a way to work with her abilities and develop new abilities in her to optimize her life,” said Roxann. “The encouragement and positivity given to her the entire time she worked with staff was above and beyond.”

Roxann continued, “Macayla now is a powerful, encouraging, loving individual to others because of the love, support, encouragement and positivity of everyone at Rainbows.”

PrevPreviousIt’s not just a job
NextLetter from the PresidentNext