Do you still believe? 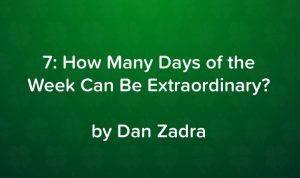 It was Saint Patrick’s Day. Another cold, gray, blustery Tuesday morning in Seattle. I was behind on a project and should’ve been at work, and my seven-year-old daughter, Rosie, should’ve been in school. Instead, the two of us were all bundled up and on our way to a grassy meadow behind a neighbor’s house–an enchanted-looking cluster of knolls where (according to my neighbor, at least) real leprechauns had recently been sighted.

Quietly, so as not to frighten the leprechauns, Rosie and I crept to the top of a knoll that day and settled down, side by side, with our backs against a big maple tree. For two or three hours, it was just Rosie and me. Sipping hot chocolate from a thermos to ward off the cold, we held our vigil, keeping our eyes peeled for the slightest movement in the long grass down by the willows.

“Rosie, did you see that?!” I whispered. “Look over there where the path ends-can you see anything?” Her eyes grew wide. By now, we were both catching glimpses of little green hats and boots flitting all around us. “Now, do you believe?” I asked her in a hushed tone, because, as everyone knows, leprechauns only appear to those who believe. Of course, by then she certainly did believe, and I guess I did too.

Then came the most magical moment of all. Late in the morning we wandered along the edge of the meadow, pushing gently at the grass with our shoe tips, hoping for one last sign of a leprechaun burrow. And then–wonder of all wonders–Rosie suddenly stumbled upon a cache of real Irish pennies and some chocolate coins covered in gold foil! Someone (a genuine leprechaun, perhaps?) had apparently dropped those coins in the grass the night before.

It was just another rainy Tuesday in Seattle for most people, but not for me and Rosie. And, despite playing hooky that morning back in 1992, Rosie made it through grade school okay, and today she has a great job. As for me, I’ve long since forgotten whatever project I was supposed to be working on. But Rosie and I will never forget that magical day in March when we lay in wait for the leprechauns together.

Many years later, on Saint Patrick’s Day, Rosie paid a visit to Seattle and surprised me with a card and a present. It was a cupful of gold-covered chocolate coins with a hand-written note tucked inside: “Dad, Happy Saint Patrick’s Day. I still believe.”

That little note remains one of my most treasured possessions.