Early Intervention is Key to Progress

We Learned How To Help Carter 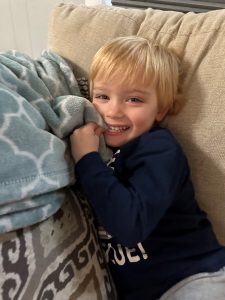 Carter has received early intervention services through Rainbows United since he was 16 months old. Carter’s mother, Krystal contacted Rainbows because he had missed a developmental milestone for walking, and she had concerns about his communication. Carter qualified for Rainbows Infant/Toddler Services and the family set goals for him walking, vocalizing more, and making eye contact.

When the family first began with Rainbows, Early Childhood Special Education Teacher Brenda Marr connected with the family virtually because of COVID. Once COVID vaccinations became available to all adults, Brenda began visiting the family in their home. In the course of providing services, Krystal and Brenda screened Carter for Autism which resulted in a need for referral for further assessment. He was diagnosed with Autism Spectrum Disorder a year later. Krystal said, “Carter is on the severe spectrum.” 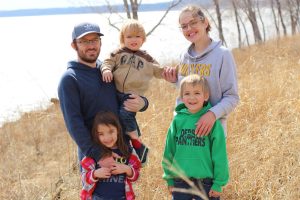 Krystal and her husband, Ken have two older children, and this is their first experience addressing developmental needs. “At first, I had no idea what to do or help him for play or communication,” said Krystal. “Brenda guided me through a lot of things and resources that gave me activities to do with him and places that would help him. The ideas and activities for giving Carter sensory input really helped me bond with my child.”

Krystal made it a priority to attend home visit early intervention sessions with Brenda. “We were really good at communicating,” she said, “If we couldn’t attend an appointment, we would make it up later.” As a result, Krystal said Carter really bonded with Brenda. “We love her, and we are kind of down about services ending,” Krystal said. “Rainbows is so fun! They have had activities like going to Botanica. Brenda was very flexible with us and sometimes would meet us at the park.”

“I felt honored to work with Carter and his family,” said Brenda. “They were always so fun, kind and willing to put in the work. Carter’s laugh would brighten my day. He made a lot of progress from not walking or communicating to running and non-stop singing and jabbering. He is a very sweet, loving child who has a bright future ahead of him.”

“Carter is speaking more and doing a lot more since we started Rainbows,” said Krystal. “He has improved in so many ways! Rainbows also helped me and my family understand people with Autism and ways to help Carter with doing things in his day to day life to help him learn and grow. Rainbows is a great program.”

Carter currently attends a half-day preschool program at the same school his siblings attend. He can go with them in the morning, which is nice. Brenda gave Krystal a list of things to do with Carter that will be easy and good with the way he learns. Ken and Krystal are excited to see what progress Carter will make in the new program.

Carter is bright and his smile will light up a room. He loves to sing and would sing baby shark all day if he could! He is a quick learner and started mimicking everyone when they would say something. He understands the whole alphabet, numbers from 1-10, and can identify numbers over 10 but has a hard time saying them. He can identify shapes, animals, and now since he’s been going to early education, he can give you a high five, talk to you a bit more, say “thank you,” “please” and is more connected than he used to be.

“Our goal for Carter is to help him communicate better than he is now because he doesn’t do eye contact and doesn’t tell us what is wrong or when he has to go potty,” said Krystal. “Potty training is a struggle, but we will get there. I couldn’t tell you what his goals and dreams are because, I mean, he would just want to be surrounded by music and sing all day. Really that’s his favorite thing to do!”

Carter and his siblings, Wesley, 7, and Primrose, 5, love to go to the zoo, Exploration Place, and the park. They also love going to Petco to look at the fish. Carter loves fish! The family enjoys arts and crafts, having dance/music time at home after dinner, watching movies and eating popcorn. Carter also enjoys the child center at church which helps him socialize.

PrevPrevious13 Ways to Play with Your Infant/Toddler
NextWhy Does My Child Need Another Hearing Test?Next