Outstanding Youth of the Year 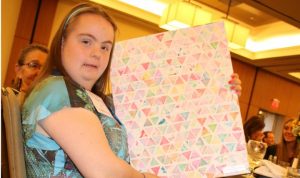 Congratulations to Rainbows’ girl Zoe Tiger for being recognized as Outstanding Youth of the Year at the Annual InterHab Power Up Conference. Zoe was honored with the award on Friday, October 18 at the Hyatt Regency Downtown Wichita.

A sweet girl with lots of energy and a sweet spirit, Zoe Tiger was born right on time, but it wasn’t until her grandmother became concerned months after she was home, that doctors diagnosed her with Down Syndrome and found a hole in her heart. She had heart surgery at 24 months and proved what her family knows now – that she’s always been a fighter. No challenge is able to stop her.

After her birth, the family lived in New Mexico and connected with early intervention services including physical, occupational and speech therapies.

“Zoe had her tonsils out right before her 3rd birthday in 2002.  She got terribly sick that night. After several days of decline, she tested positive for RSV.  The decision was made to intubate her so she could recover.  We thought we had lost her several times, but she put up quite a fight,” says her Grandmother, Sallie who has been her main caregiver and guardian throughout her life.

She was in the hospital for 6 weeks and left with oxygen full time until she was 5 years old. Sallie remembers that as a scary time in all of their lives. She talks about a time in the hospital when Zoe pushed her hand away as she tried to feed Zoe. Zoe worked hard among all the tubes and equipment to grab the spoon in her hand and feed herself. “She’s always been a fighter,” said Sallie.

When Zoe’s health was compromised at the higher elevations in New Mexico, the family moved to Wichita. Zoe was 11 years old and got connected to Rainbows for Targeted Case Management Services. Zoe has formed life-long friends at Rainbows’ Camp Woodchuck, which she has enjoyed attending for the last 8 years. Her grandmother, Sallie credits Rainbows’ with helping Zoe mature and develop social skills. “Zoe enjoys Camp Woodchuck and the social interaction she gets with her friends as well as the young staff,” said Sallie. She loves to help other Campers in wheelchairs and introduce her grandmother to her friends.

Her positive, open personality makes others in her presence comfortable. A sweet girl with a bright smile never knows a stranger. She is always friendly and willing to help others.

Over the years Zoe has made successful, yet difficult transitions between schools and now into some adult services. She was a comfort to many when her beloved grandfather passed away. She continues to attend Camp Woodchuck during the summer.

Zoe graduated from Northwest High School in 2018 and now attends Dunlap Transition Campus at Chisolm Life Skills Center where she continues to learn new activities and vocational skills. She now receives a paycheck through work she does sorting tools for Spirit Aerosystems. She also works on life skills and independence. She is part of the cheerleading squad and went to the prom this year.

She enjoys dancing, camping, raft trips with her family, and caring for animals and younger children. The family has 2 cats and 2 dogs Zoe helps care for daily. She’s learned to read, ride an adult-sized tricycle, and most recently to tie her shoes – a skill she worked at until she mastered it! Sallie says, “The only things she can’t do are the things we haven’t tried yet.”

Zoe lives with her grandmother, her biggest advocate. Sallie says, “Having Zoe in my life and seeing what she has been able to accomplish has made me a better person. My life would not have meaning without Zoe in it.”

Rainbows is proud of Zoe and all she has accomplished.