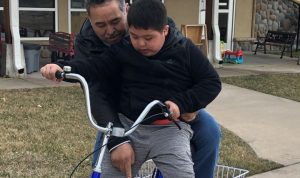 Even though the Blarney Breakfast event has been adapted to a virtual event, the event is important to Rainbows as a major fundraiser. Opportunities to support Rainbows are now focused online and through local media. Items that would be sold at the event, will be available online at RainbowsUnited.org.

Imagine you’re an 11-year-old boy whose doctor has ordered you to stop playing almost all sports, including basketball and running, because if you get hit by a ball or run too fast it could cause you serious injury. You are only allowed to swim, but swimming is not much of an option during the winter months. Adrian is that boy.

Adrian is a social 5th grader.  He goes to Mass every Sunday, likes Mexican music and food, and being with his family.  Adrian has Down Syndrome which causes developmental delays, heart defects, respiratory issues and intellectual disabilities for him. He also has short, delicate muscles in his neck, from his head to his shoulder.  Any type of injury can have a grave effect on these muscles and may cause serious injury, so he has to protect them.

“When Adrian was born, Rainbows came to the hospital,” said Maria, Adrian’s mother. “He began to receive Infant/Toddler Services right away until he was 3 years old. Adrian now receives Targeted Case Management services from Rainbows in our home.”

When Shannon Long, Adrian’s Case Manager, and Scarlet Grassie, Rainbows’ Interpreter, spoke with Maria about the Blarney Breakfast nomination, she was excited at the opportunity for her son and she immediately knew what Adrian needed. Adrian previously enjoyed riding the tricycle at school. Maria took a picture of the tricycle to Adrian’s pediatrician and the tricycle was approved as a form of exercise for Adrian.

A larger tricycle with a wider seat and helmet will allow Adrian to start exercising again. It will allow him to be active and go biking with his family and friends. “Rainbows has always helped me to connect to various services,” said Maria. “Whatever I requested, they have always helped me figure it out.”