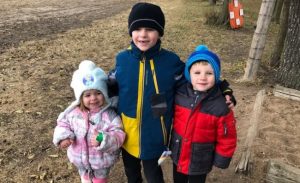 The Reichenberger family has been part of the Rainbows’ family for 7 years. “All three of the kids, Henry (7), Owen (5), and Quinn (2), started with Rainbows from 3 months on, and we anticipate they will be there through pre-K,” said Megan, the children’s mother. “Rainbows has been a second family to us.  They have loved our kiddos and helped them grow.”

“When I was looking for a daycare with my first baby, Rainbows was only recently opening up the baby room,” said Megan. “I took a tour and it was a fit for us right away.”

“Everyone at Rainbows is wonderful – there is something special about walking through the door and people knowing my kids by name even when they aren’t in the room with them,” said Megan. “Lance and I are able to go to work each day knowing that our kids are loved and cared for in a safe environment at Rainbows.  Having comfort in knowing the staff there has our backs and want the best for our kids makes it easier for us to leave them.”

“From the beginning Charlesetta, para-educator, was a favorite – and made it so easy for us to drop our little ones off because we knew she loved them,” said Megan. “I have a video of some of Henry’s first steps and Miss Charlesetta is in the background cheering him on – when we play it he knows it’s her voice right away and he hasn’t been at Rainbows for a couple of years.”

“I give Rainbows a lot of credit for how outgoing and social my kids are,” said Megan. “They were so comfortable at Rainbows and able to really be themselves – and that really has translated outside of daycare as well.  Watching my oldest transition to an elementary school was fun – he was already used to the structured way of learning so the transition was easy on him.”

“At every room we have been blessed with people who cared and loved us. I often joke that Miss Autumn and Miss Paula help set me straight when I need a little advice on keeping my kiddos on the right path. Their tough love has been much appreciated and my kids have thrived from that.”

“The whole Reichenberger family are some of the most kindhearted people I’ve met,” said Lead Teacher Autumn Hutchison. “Megan and Lance are always willing to help out whenever they can inside and outside Rainbows.”

“During my five years at Rainbows, I’ve always been blessed with a Reichenberger in my classroom,” said Autumn.  “The oldest sibling, Henry’s smile and laugh could brighten up anyone’s day. Henry was in my first class at Rainbows. He was this cute little chubby-cheeked, curly- haired boy who was always moving. Henry would tell me crazy stories about his many chickens which he named Mary, Mary, Mary, and Charlesetta.  Henry loved anything yellow, and he had these small yellow converse shoes he wore all the time. Once Henry reached three, he became the big brother of Owen. Every time, Henry gets to come to Rainbows he will always stop by and give me a hug or a high five.”

“Owen could tell some stories too,” said Autumn. “According to Owen, he wasn’t from planet Earth; he was brought here on his spaceship from Mars. On Mars, Owen ate pop tarts, squishy cookies, chicken nuggets and ketchup.  Owen loves to laugh and cuddle with his blankets. Owen wore the same yellow converse shoes Henry used to wear and just looking at them made me remember all my memories of Henry. When Owen turned 3, he became the big brother to Miss Quinn.”

“This little momma can make any gray day go away,” said Autumn. “Every day when I walk into the classroom, Quinn squeals and says, “Ms. Autumn! Ms. Autumn!” and comes running to give me a hug. Quinn loves playing house and pretending she is the momma. She has the Reichenberger smile, cheeks, and laughter. Just like her brothers, Quinn can tell some stories too. She’s such a brave little girl; she loves to tell the teachers about the spooky house her daddy built her in the garage. The girl has no fear. Quinn is a social butterfly; she just walks around smiling and saying hi to everyone.”

The Reichenbergers have a large family. They have lots of animals that are well-loved: three dogs – Dot, Chip, and Minnie; three cats – Figaro, Darla, and Bill; two goats (whose names always change); and lots of chickens. “We love caring for animals, creating adventures in our yard, swimming, lake time, and above all just enjoying time with our family,” said Megan.