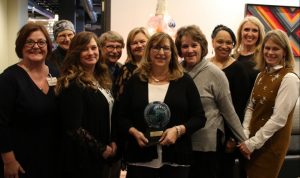 Rainbows’ Annual Meeting was held Tuesday, December 11 at Aloft Hotel. The evening was one of celebration and recognition of 2018 accomplishments – and there were many.

Board of Director’s Chair, Gail Johnson of Intrust Bank, welcomed the group of nearly 75 people and shared the following milestones:

All of the wait staff who work the Blarney Breakfast have volunteered their time; some are previous Old Chicago employees that come back to work the breakfast; and others are family members of employees who also want to participate in the fun

The staff at Old Chicago serve 1,000 people breakfast in only 3 hours!  That’s an amazing task for any restaurant, let alone a restaurant that’s known for serving pizza! The Blarney Breakfast has been described as organized chaos and through it all, the staff at Old Chicago always provide great customer service, provide wonderful food for all our patrons and do it all with a smile and a little Irish kick in their step.

Neil was a champion of Rainbows throughout our restructuring phase always assisting and encouraging. He is an advocate for early childhood education and recognizes the critical role families play in the education of young children.

He became Dr. Neil Guthrie in 2016. We are grateful for his support over the years.

Our third award & recognition was to Sue Leisman, with The Miller Group

Sue is a Senior Account Executive with The Miller Group – Rainbows’ Broker – focusing on Employee Benefits and Human Resources.

What Sue really is to Rainbows – is “Invaluable”. In fact, senior leadership at The Miller Group have been told Sue is to NEVER be taken off our account. Sue is an essential partner of Rainbows assisting us annually in getting the best pricing for the best health insurance coverage and other benefits for our employees.

When an employee has a unique situation and is being denied coverage, Sue goes to bat working with our insurance carrier and usually resolves the situation. Without her intervention, this would not happen. She talks and works faster than anyone else we know – always responsive, thorough and professional.

A BIG thank you to Sue, for being a valuable partner of Rainbows.

Although she was unable to be present at the event, Senator Carolyn McGinn was honored for her support. During the Kansas 2018 Legislative Session, an additional $2 million was secured for the Statewide Infant/Toddler System known as tiny-k. This would not have happened without the leadership and guiding hand of Sen. McGinn.

In the Fall of 2017, Sen. McGinn toured Rainbows and heard about the funding need – some infant/toddler networks were closing because of lack of funding. Sen. McGinn, always quick to know the numbers asked key questions to have a better understanding of the situation. She then put into the Ways and Means budget – which she Chairs – a request for the additional $2 million.

Some may have shied away from requesting more funding for anything but not Sen. McGinn. She is a strong advocate for Kansans who need assistance and believes that is a role of State government. Because of the respect that she has earned from fellow Legislators and the Administration, she successfully secured the much needed funding.

We were honored to thank Senator McGinn for her courage and confident leadership in supporting services to young children with special needs and their families.

Our final community award recognized the Super Hero Project team of Jake Ramsey, Meghan Polk and The Justin McClure Team. With a little inspiration and a lot of determination, four friends turned a social media share into a powerful film with a lot of heart.

Jake, Meghan, Justin and Hayley Lunn (who was not present) connected on social media and combined their talents to bring out the super hero in our Rainbows’ youth. They went on local televisions and asked the public to donate super hero costumes

Justin and his team brought in the green screen and professional equipment.

When our Rainbows’ kids put on the super hero costumes and got in front of the camera they were transformed. Their super powers like: kindness; helping; adventurer; dancer; and dependability all came front and center.

Justin and his team animated the amazing backgrounds and added the special effects to the film, giving it the BAM, POW and SHAZAM that makes it all work. These volunteers organized a showing of the short film at the Orpheum theater for the kids and their families to view the film for the first time on the big screen……then, they held a Launch Party and shared the film on social media sharing Rainbows mission to thousands around the world.

It was our pleasure to thank them for sharing their super powers of ingenuity and generosity with Rainbows through this project.

The presentations concluded with Rainbows’ Prism Award. This award was created to honor a Rainbows staff member for exemplary service who demonstrates all of the Guiding Principles. This person is nominated and voted on by the program coordinators.

This year’s Prism Award winner is Peggy Burns, a member of Sedgwick County Infant/Toddler Services. She has worked for Rainbows for 13 years as a Speech language Pathologist.

She is a hardworking, dedicated, kind, intelligent staff member who can remain positive and inspire others even in the most difficult circumstances. She is a valued team member because of her composure and her willingness to take on responsibility.

Members of the Builders Group have reflected on their experience bringing myEvolv into being, they emphasize the stress, the teamwork that is required, and the difficulty of managing one’s regular job while producing Rainbows new database.

They see the one person in their group who has been able to maintain a positive attitude throughout these last 12 months, show patience and compassion for other Builders, and demonstrate leadership.

Peggy has done an amazing job managing her ITS caseload while serving as a Builder. The Guiding Principle that she has illuminated for us is “Actively listen and effectively communicate.” She has done a stellar job in listening to her coworkers in the Sedgwick County ITS team and bringing their concerns about myEvolv to the Builders Group.

Another Guiding Principle that is evident is her steadfast commitment to “Achieving success through teamwork, partnership and collaboration.” When collaborating she listens to all voices and looks at all the angles of a situation before she speaks thoughtfully.

Peggy’s name will be placed on the Prism Award plaque at Kids’ Point.

The evening concluded with thanking Gail Johnson for serving as Chair for the past two years and some brief business including recognizing Janeen Hughes as 2019-2020 Board of Director’s Chair.

– By Michelle Eastman and Jane Eby