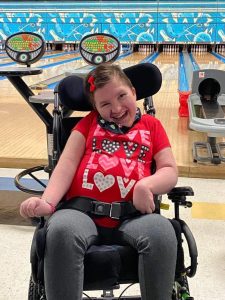 Carrie and her twin-sister Abigail were born at 29 weeks and due to their rough delivery, both had Grade II Bi-Lateral bleeds. Abigail’s corrected itself, but Carrie’s graduated to a Grade IV and caused her to develop Hydrocephalus which led to a diagnosis of Cerebral Palsy.

A very happy, almost 16-year-old teenager, Carrie (who has always gone by Care-Bear) looks forward to Camp Woodchuck every summer. “We got involved with Rainbows in the summer of 2013 after her mother had passed away,” said Michael, Carrie’s father. “I wanted to make sure she received as much social interaction as her sister, who was participating at Camp Hydye through the YMCA, and her Life Skills Teacher at Colwich Elementary referred us to Rainbows.”

“The staff at Camp Woodchuck are always very helpful and happy to see Carrie,” said Michael.” I know she enjoys seeing them, too”. Carrie and her Direct Support Professional, Monica like to do fun things like go for walks, hang out outside and watch the neighborhood kids play. Carrie especially enjoys the fun Rainbows’ weekly scheduled outing activities.

“It has been a joy to watch Carrie grow over the years,” said Tiffany Graf, Family Support Services Coordinator and Camp Director. “She is no longer a shy, little girl. Now she’s a teenager with a big personality and voice.”

“Carrie is 100% cognitively all there,” said Michael, “and she has increased her vocabulary skills over the past few years to allow herself more input on day-to-day life. She loves being around her peers of all abilities.”

“We want Carrie to remain happy and healthy,” said Michael. “We want her to continue to participate in as many social activities as possible and eventually live as independently as she is able.”

Carrie and Abigail live with Michael and their stepmother, Michelle, along with their two dogs Remi, a Great Dane, and Annabelle, a Schweenie. Carrie enjoys going out to eat, shopping, and getting to watch her sister compete in competitive dance. Carrie also enjoys Adaptive Baseball League & Bowling League through The Meaningful Life Foundation each year and will be a sophomore this year at Garden Plain High School.