Pete’s Got a Good Life 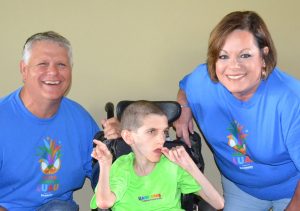 Peter, the third son born to Nancy and Ed Hampel was not progressing like their older boys. When he was 3 months old, their doctor diagnosed Peter with cerebral palsy and multiple severe developmental delays. Peter began receiving speech, physical and occupational therapies through St. Francis hospital.

Nancy’s sister, Connie, had worked at Rainbows United and suggested Nancy and Ed call Rainbows for help. The family began receiving home-based services with a special education teacher and occupational therapist who educated Ed and Nancy on how to stretch and position Peter to help develop his motor skills and strengthen his little body. They worked with them on feeding techniques to encourage Peter to eat. Because of Rainbows’ Early Intervention Program, Peter progressed much further than Nancy and Ed dreamed he would. “He started to react and interact,” said Ed.

“When Peter first started attending Rainbows’ center-based early care and education program, he had a tough time in the transition,” said Nancy. “Gradually, he not only grew accustomed to going to Rainbows every day, but was excited to be at school. He absolutely loved it.” Peter was in a classroom with a teacher and also received speech language, physical and occupational therapies every day from staff right in the center.

“We had all the support in the world from Rainbows’ staff,” said Ed. “The very first things we noticed were the changes in Pete socially. He was now friendly, happy and laughing!” Peter’s favorite times at Rainbows were the field trips, especially the Easter Egg hunts at Joyland Park and visits to the pumpkin patches where he came home with his own pumpkins.

“We see new things, little things, happenings all the time,” said Ed in a 1995 video about Rainbows’ services. “It’s hard to talk about the future, and I am definitely the world’s biggest optimist, but I just feel that Pete’s gonna have a good life. I just feel this is the beginning of something big.”

After Peter graduated from Rainbows’ preschool program, he started kindergarten at Levy Special Education Center. He did well riding the bus and the transition to a different location. He was in school at Levy from 6 to 21 years old.

Peter also began attending Rainbows’ Camp Woodchuck during the summers. He loved going to Camp and especially enjoyed the energy of the college kids who worked Camp. “Camp Woodchuck helped us maintain our normal lives and work responsibilities,” said Ed. “Without Camp Woodchuck, our summers would have been very disruptive as it was difficult to find caregivers we could trust to watch Pete through those summers.”

“Rainbows helped develop Pete’s happy and joyful personality,” said Ed. Peter is now 32 years old and goes to Catholic Charities Day program every day. He has received services there since he was 21. He loves it there and Ed and Nancy absolutely love the program. Peter is thriving.

The Hampel family continues to support Rainbows today. “We have seen many other families through the years that received services from Rainbows,” said Ed. “The city/area needs the Rainbows’ organization to succeed and grow as there are many ways it touches the kids who receive the services and their families as well.”

For many years, the Hampel family supported Rainbows through the Annual Peter Hampel Luau event. The event was an opportunity to celebrate children with special needs and their families plus raise awareness and funds for Rainbows. Over the 13- year history a total of $475,300 was raised through the event.