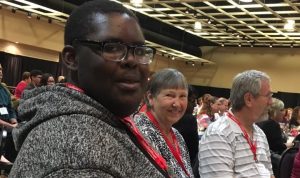 This year’s InterHab Conference was held October 25 – 27 in Topeka. It’s always a wonderful time of learning and networking for staff who attend. Connecting with others across the state on important issues impacting providers as well as individuals served.

The event ended Friday with the Awards and recognition lunch. Michael White, Rainbows’ teen was honored as the state’s Outstanding Youth. Michael and his parents, Stephen and Francis White, attended the lunch along with Ellie Friess and her mom, Stephanie Friess representing the winning Art entry.

A young man with great strength and a big heart, Michael White has come a long way. As a toddler who was hungry, cold and without proper care, he and his three siblings were placed in foster care when he was just three years old. It wasn’t long after, that he and his older brother, also with special needs, became part of the home of Stephen and Frances White.

With a place to call home, loving parents and a routine, Michael began to trust others and thrive. He is now confident in sharing his needs with those who can help him. He often saves up his money from chores to buy something special at the store or pick out a movie to watch with his dad and sister. He is close to his older brothers and enjoys going out to eat and to movies with them.

At 17, Michael stands more than 6’ 3” tall and has the build of a successful lineman. Easily able to reach the basketball net, he struggles with coordination and balance. He is not able to ride a bicycle. When the weather is good, it is guaranteed that you can find Michael outside. He enjoys sports, especially basketball, games and other outdoor activities. He is part of the Wichita Northwest High School Bear Buddies basketball, soccer and weight lighting programs. “Michael is competitive and loves to play,” says Candace Staker, Family Support Supervisor.

Michael will started his Senior year at Northwest High School in August and plans to attend Chisholm Life Skills Center until he turns 21. He wants to have a job and live independently like his older siblings have done.

He has received Rainbows’ services since 2006 including Targeted Case Management, Supportive Home Care, Camp Woodchuck and After-School Latch key. “It is very important to kids like Michael to have the right structure to be successful,” Francis said. “That is what Rainbows gives Michael.”

At Rainbows, Michael is able to interact with his peers. Camp has improved his social skills as well as help him be more calm. He enjoys doing things with his friends, it’s important to him. A jokester as well, he uses humor to lighten the mood and engage others around him with his contagious smile.

You can see the InterHab video about Michael here.

Also recognized was Ellie Friess. Ellie is a fifth grader and attends Camp Woodchuck in the summer where she helped create the artwork that was transformed into an award for another category winner. Read Ellie’s Rainbows’ story here.

Congratulations to both Michael and Ellie. Rainbows is proud of you both.