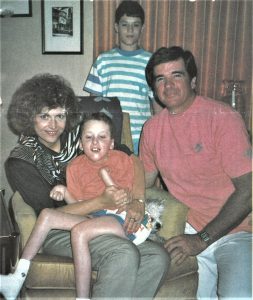 “My whole journey started at Rainbows in 1978 when my husband, Walt and I adopted a little 5-day-old boy named Brandon,” said Margaret, Brandon’s mother. “He was just perfect.”

As he grew, Margaret became concerned that Brandon was not progressing as quickly as other babies his age, and her sister noticed Brandon wasn’t following with his eyes. When he was 5 months old, Margaret and Walt took Brandon to a pediatrician where they found out Brandon had suffered a prenatal stroke and part of his brain had not formed. They were referred to Rainbows at that time and Rainbows became an integral part of their family.

Brandon attended Rainbows’ Wellesley location and received physical therapy, occupational therapy and speech language therapy. “Kelly McNeil, one of his therapists, became like a second mom to Brandon,” said Margaret. Margaret began volunteering with some of the children, so she was at Rainbows several times a week. “It was so amazing to me that every single child was treated with such love while pushing them to accomplish their goals,” she said.

When Brandon was 18 months old, he was hospitalized with borderline pneumonia. “Call it Mother’s intuition, but I just knew something was wrong as he didn’t act normally through the night,” said Margaret. The next morning when the doctor came in to check on him, Brandon stopped breathing on his own. They rushed him to Wesley Hospital where they found that Brandon’s brain had herniated and the involuntary part of his brain didn’t tell him to breathe. The doctor put a shunt in Brandon’s little brain, and he was able to breathe. The end result was Brandon reverted back to a prenatal stage.” 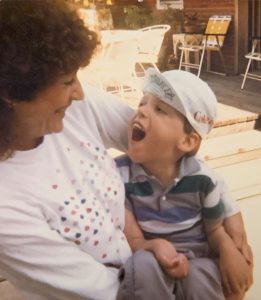 Brandon returned to Rainbows where he was cared for and loved. “If anybody had a bad day, they got to hold Brandon,” said Margaret. “He had this gift of being cuddly and smiling, and he just made people better.”

“I don’t know what we would have done without Rainbows,” said Margaret. “It gave us a break from 8 a.m. to 3 p.m. It gave us a chance to LIVE. When Brandon was at Rainbows, I never worried about him. They were our lifeline and they totally changed our lives.”

Brandon was 3 years old when Margaret and Walt adopted 7-year-old Karl. “The adoption agency shared that Karl was hyperactive and had a speech delay, but was bound to blossom in a loving home,” said Margaret. “Karl came to us with a cardboard box and a suitcase, with clothes from a rummage sale that still had the price tags on them. Life had not been easy for Karl.”

After Karl had been in several schools, Margaret and Walt realized that along with the hyperactive diagnosis, he had some mental challenges and was aggressive. However, Karl was never aggressive toward Brandon. “He was the best brother to Brandon,” said Margaret. “He was very protective of Brandon and loved to push him wherever we went.”

Margaret and Walt became strong supporters of Rainbows. Margaret served as the parent representative on the Rainbows’ Board of Directors for 4 years and on the committee for Long Range Planning. In 1977, 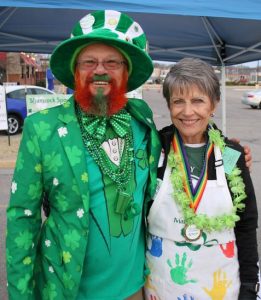 Margaret wrote a letter to KAKE-TV championing Rainbows as the charity to receive proceeds from Blarney Breakfast. Since then, Margaret and her Chi Epsilon sisters have helped raised more than $614,00 over 47 years to support Rainbows’ programs for children with special needs and their families. Margaret is also a member of Rainbows’ Friends of the Heart who organize Fashion Passion.

Thank you, Margaret for your passion for children and all that you do.

PrevPreviousIs Your Baby Stressed Out?
NextHow do you know what a baby sees?Next