Advocacy and Self-Help Lead to Success 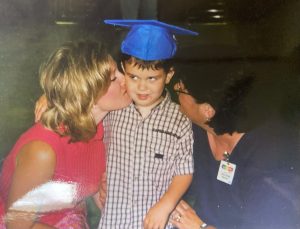 Twenty-six-year-old Brayden is the biggest KU basketball fan you’ll ever meet. He is very sport-oriented, enjoys golfing with his dad and uncle and has played tournaments with them. This summer, Brayden and his mom, DeAnne attended Rainbows’ 50th Birthday celebration at the Wind Surge baseball game. Brayden has been part of the Rainbows’ family since 1997.

In November 1996, Brayden was diagnosed with Optic Nerve Hypoplasia (ONH) and Progressive Development Delays. After the diagnosis, his in-home daycare decided she was unable to care for him any longer. “This was devastating and God sent all in one,” said DeAnne. “I was a single mom and needed to work to support us. The ophthalmologist who diagnosed the ONH helped us get in contact with Rainbows and we were placed on the waiting list. Between December 1996 and March 1997, Brayden was passed amongst multiple family members so I could continue to work.”

Brayden started at Kids’ Cove in April 1997. He loved Rainbows. DeAnne would drop him off in the mornings and pick him up after work. At the end of the day, Brayden would lift his ear to the door and as soon as DeAnne walked into Kids’ Cove, he could hear his mom. During the day, he received occupational, physical, speech and visual impairment therapy. Leslie English, Early Childhood Special Education Teacher and Visual Specialist, and Jan Hathaway were two of the Rainbows’ staff who cared for Brayden. Jan was his first classroom teacher and Leslie was his visual impairment specialist. As the teacher for the visually impaired, Leslie worked with Brayden on identifying objects by touch, sound and taste, pre-braille skills and when he was older, she started him reading braille and worked with him on using equipment such as the braille writer.

Leslie worked with Brayden on navigation within his classroom, in the building and playground, and adapting projects/toys/books and activities that the classroom was doing. She worked with Brayden on using a cane to navigate and with DeAnne on letting him fail. “One of the hardest things I had to learn was to let Brayden fail,” said DeAnne. “He was learning to use a cane and needed to keep the cane in front of himself. If we were walking together and I noticed he did not have the cane in front, I had to let him fall or bump into things. It was hard for me as his mom, but necessary.”

Leslie also worked with Brayden and DeAnne on self-help skills, advocacy skills, language development and advocacy for Brayden at Rainbows and outside in the community “Brayden was my first child, and it was foreign to me,” said DeAnne. “Rainbows helped make me a strong advocate for my child. They walked me through IEPs. They helped me learn to stand up for Brayden. If you have a child with special needs, it is a necessity. I would not have known how to get things done for him. With the help of Rainbows, the transition into the school district was easy. They SAW him. He wasn’t a statistic, a number.”

Once he was in school, Brayden attended Camp Woodchuck, Rainbows’ summer program for children with special needs. Brayden and DeAnne are still in contact with Jan and Leslie. “I honestly cannot express the bond, appreciation and amount of love Brayden and I developed with Leslie and her family,” said DeAnne. “Leslie, her husband Richard, and her four boys (David, Alan, Eric and Austin) loved him and treated him like family from the moment they met him.”

“Brayden became a fifth brother to my boys,” said Leslie. “I remember at my youngest son’s wedding reception when I told my boys that Brayden was there, they all made a beeline to greet him. Brayden has always had a fascination with numbers and the weather. He is able to tell you what day you were born on if you tell him the date and the year. He can remember the date of tornado drills/fire drills. To this day he will text me and tell me about the weather in another county in Kansas.”

Brayden lives with his mom, 17-year-old sister and 13-year- old brother. He enjoys going to the lake, boating, visiting the family farm and listening to his Papa’s stories and learning the history of the land and the family, riding 4-wheelers, and basketball.

“I never encountered any staff member who didn’t want to be there, which is huge,” said DeAnne. “They see your child. They love your child. They want what’s best for your child. They celebrated the victories with us and worked through the trials with us. I credit Rainbows with most of the successes.”