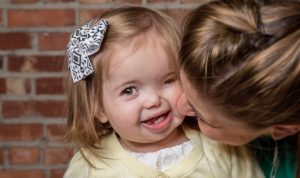 Elza Henry is a Warrior Princess in every sense of the word. Elza’s mom Joice said, “Elza has been a light in our lives, and if sharing her story helps anyone else out there, let’s share it. Let’s shout it off the rooftops! She is amazing and we can’t imagine our lives any differently.”

“Elza’s start was precarious to say the least,” said Joice. “She had a ‘floppy larynx’, labored breathing, sleep apnea and failure to thrive, on top of her Hemifacial Microsomia. Her breathing structures (nose and throat) are atypical so it was a challenge to even breathe in the beginning. When Elza was 6 months old, she had surgery to repair her larynx, and went from 2% weight to a now healthy 65%.”

At 3-weeks-old, Elza began receiving services in her Butler County home with a Rainbows’ therapist.  “Elza was literally fighting to live her first few months of life, but now she is just like any toddler,” said Joice. “We worked diligently to get her to where she is today. Her dad, Michael, and I work as a team, and we are incomplete without each other. Her speech is coming along. She is almost caught up thanks to her therapist Joanna and all the tools we have been introduced to through her.”

Elza is in the middle of her two brothers, William, 5, and Walter, 1.  She is as loving as she can be and holds her own with both little and big brother. Everyone in the family loves the theatre, playing outside, taking walks and going to the park.. “We travel as a family,” said Joice.  “Our goal is to visit all 50 states before each child is done with high school.”

“I absolutely adore the families I work with,” said Joanna Wiebe, Butler County Early Intervention Speech Language Pathologist.  “Elza’s family has stolen my heart. I’ve been working with them since she was a young infant. Her mother, Joice is insightful and positive in every step of Elza’s journey. It has been an honor to support them.”

“Any chance we get, we tell people about Rainbows,” said Joice.  “Joanna has been a godsend. Her quiet demeanor and positivity have been a force in Elza’s life. Even when it seemed bleak and discouraging, she was always there to pick up our pieces. We are and will be forever grateful, not only for her “work” but for her heart being in our lives.”

Today, Elza is the most independent 2-year-old you’ll ever meet. Her favorite thing to do is to dance. “The fears I had of whether or not she’d be okay are quieted immensely now that we know her personality and know that she is in our lives to teach us so much more than we ever knew the day she was born,” said Joice.