Why Do I Support Rainbows United? 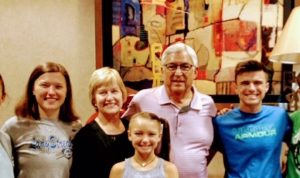 When I was asked to share why I support Rainbows in a post for this blog I began thinking about when I first became aware of Rainbows, and why I felt strongly that it was the type of organization I wanted to be involved with and support, and it became obvious that I really couldn’t pinpoint the actual time or event that lead to my involvement but that it was a series of events.

I first met Linda Weir Enegren and her husband Phil in the late 70’s. We were members of First United Methodist Church as were the Enegrens. The Church had a unique program, The Religious Nurture Center, that provided alternative programing on Sunday mornings and throughout the week for individuals with special needs. Each Sunday Linda and Phil would come to church in a large van and bring all of their children, several had special needs.

It was during that time that I became aware that Linda had founded Rainbows. Sometime during that period, I also learned that the impetus for Linda founding Rainbows was impacted by knowing a family who had a child with special needs that was facing a decision to institutionalize their child instead of caring for them at home because they simply could not care adequately for the child at home.

That hit home for Susan and myself because Susan’s family faced that same issue in the 50’s when her younger sister Sheryl Linn was born with Spina Bifida which quickly caused Hydrocephalus and multiple physical and mental health issues. There was no Rainbows United at that time and her parents had to make, what must have been one of the most difficult decision parents must ever make, to institutionalize their child as the only alternative to provide the care Sheryl needed.

Over the next 30 years I was aware of Rainbows, knew generally what they did, but was not directly associated with the organization.  As a United Way Board Member and Chair of the Allocations Committee, I became more aware of their programming and contribution to the community.

The event however, that brought all of these bits of prior knowledge about Rainbows into a clear focus for me and made me want to become actively involved occurred in July 2009. I read an article in The Wichita Eagle about Rainbows needing to engage in significant restructuring of operations and reduce staff if they were to survive.

I had retired from INTRUST Bank a few months earlier and was “getting antsy” to get involved in something other than golf and travel. I called Steve Cox, whom I had known since high school and who was Chairman of the Rainbows’ Board at that time and asked if there was anything I could do to help. With my Human Resources background, I thought I might be able to help with the multitude of issues related to restructuring.

What I have learned first hand since that day is that Rainbows is an organization that provides a vital and unique source of assistance, resources, training and hope for children with special needs and their families within our community.

In visiting with community members about Rainbows during the restructuring and since one sentiment is virtually universal and that is that the community wants and needs the services that Rainbows, and in many cases only Rainbows, can provide.

That is why I support Rainbows.