Story from a Rainbows family 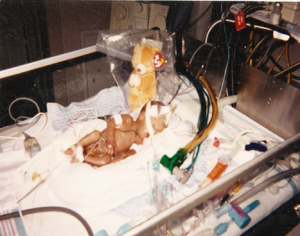 Cole is our “little miracle” who is a wonderful blessing to our family.  Cole is 15 years old and has two sisters who adore him.  Alexis is his “big sister”, she is 17 years old, has always been very protective of Cole and extremely loving to him since the day she laid her eyes on him.  His “little sister” is Savannah, she is 13 years old, she also adores her big brother, and they have a fun “give and take” between the two of them.  We have a big family with lots of cousins who all love Cole and his fun personality.

Cole was an identical twin.  I was diagnosed at 18 weeks with Twin to Twin Transfusion Syndrome, this only happens in identical twin pregnancies.  It is when one baby gets the majority of the blood vessels from the placenta verses the other baby.  This caused one twin to have more amniotic fluid verses the other baby.  My case was very severe and I had to go in everyday to the Perinatologist, even on the weekends, to get fetal biophysical profiles and have two liters of fluid drained almost 2-3 times a week from the larger twin’s amniotic sac.  It was awful, but it was the only way to give them a chance for survival. The procedure was awfully painful considering it was done without any pain medication.  God gave me the strength along with my wonderful supporting husband Heath. On April 13, at 28 weeks I woke up in the morning and knew something was wrong.

I always could feel both of the babies moving Mason was up higher and much bigger than Cole.  I felt like I was not feeling as much movement as normal, so we went in even earlier that day for my appointment.  They immediately informed us that Mason was in trouble and they had to take the babies by emergency C-section and it was also getting dangerous for me as well.  My body was telling me things were going downhill by just how weak and awful I was feeling.  They took the twins at 28 weeks, 3 full months early.  Mason was 3lbs. 14oz. 14.5 inches long and Cole was 1lb. 4oz. 11 inches long.  They both were not only micro preemies, but were extremely critical.

They whisked them away quickly and immediately starting working on their tiny little bodies.  Sadly, Mason  only lived a couple of days, his little heart finally gave out after working so hard in the womb trying to pump all that extra fluid.  As you can imagine, this was devastating to our family and at the same time, having Cole fighting for his life.  Cole was only the size of the Praying Beanie Baby stuffed bear. Cole had a 2% chance of survival and for the next several weeks it was the roller coaster ride of a lifetime.  Cole was brought back to life on three different occasions and had heart surgery when he was only 2lbs. He also had a double hernia repair as well as a blood transfusion.

I finally was able to hold Cole for the first time after he was 30 days old for five minutes.  I will never forget that moment of being able to hold my baby boy for the first time after being so critical. After three long months in the NICU and two weeks in the Special Care Unit, Cole was released from the hospital at a whopping 4lbs. He came home on heart monitors but, didn’t need oxygen which was a miracle in itself.  Cole also suffered bleeds in his brain after his birth which contributed to his severe developmental delays.  At one point when Cole was a tiny baby, the doctors told us he wouldn’t crawl or walk and could end up with cerebral palsy.  At six months of age we found out Cole had a profound hearing loss which required that he wear hearing aids.

Once Cole received his hearing aids, our journey began with Rainbows.  It started with the absolutely wonderful Infant/Toddler services with Jane Schwartz.  Jane came to the house at least twice a week and worked with him patiently and, was so comforting and supportive to our family.  I really don’t know what I would have done without her.  After two and half years of lots of physical therapy and help from Jane, Cole finally took his first steps, now he can run, it may be uncoordinated but he can go!  Once again Cole proved the doctors wrong.  As you can imagine it was a joyous day!  I really give Jane a lot of the credit for getting Cole to walk.   We loved her so much and, so did Cole!

She introduced us to Janet Essau who came to the house and taught us sign language for a few years on a weekly basis, which was made possible through Rainbows.  It was a truly special experience learning sign from someone who was actually deaf and so enthusiastic.  Janet taught us what we still know today.  Cole and his sister, Alexis, both attended Uptown Kids, which was also a great experience.  We truly have been blessed with the support and great people we have come to know through the years with Rainbows. Cole is a very happy child that loves to be outside, jump on the trampoline and play with his sisters.

Cole uses very basic signs to communicate and we are trying to teach him to communicate more on his iPad.  He is a blessing in our lives and brings us joy every day. The past two years have been truly a unique joy with our most recent Targeted Case Manager, LaNier Roberts.  She is a very “special gem”.  We have never seen anyone be so eager to help Cole with such enthusiasm, empathy, and compassion as LaNier!  She always has a smile and a very sweet presence whenever we meet to talk with her about anything.  She has worked so diligently and patiently while keeping a positive attitude when it came to getting Cole a fence for our family this year.  She never stopped trying after being rejected more than once.

A fence is so important and a necessity due, to our house being on a corner lot and close to a busy road. Cole is a flight risk and doesn’t recognize danger. Due to her exceptional hard work and effort it paid off, she was able to secure enough donors that we were able to get a fence.  This was such a huge blessing to our family and Cole, thanks to LaNier and the great services Rainbows has been able to provide our family through the years.  Lanier was also successful in getting us pull-ups and Ensure for Cole which is a huge expense when Insurance does not pay and we do not qualify for any state funds. Once again, we have been so blessed to have met LaNier and, the special services that Rainbows has provided for Cole the past 15 years.  We truly are so very thankful for Rainbows, Jane Schwartz, Janet Essau, and Lanier “wonderful angel” Roberts, we appreciate everything that you all have done for our “special miracle”, Cole! Sincerely, Heath, Tiffany Alexis, Cole, and Savannah Denny