Advocates for People with Special Needs 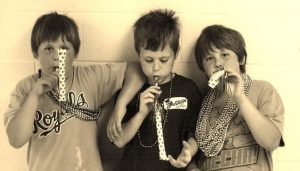 “The path, the journey we’ve been on, it all started at one place -Rainbows.”

As a 10-year-old volunteering with her mother at Blarney Breakfast, Gretchen DiGiovanni had no idea the impact Rainbows United would someday have on her family. Gretchen’s parents, Dick and Carol Rohloff, are long-time supporters of Rainbows.

Gretchen continued to be a part of Blarney Breakfast, volunteering at the event when she worked at Willie C’s in college. Years later, her husband Sean would be instrumental in relocating the event to Old Chicago East and ensuring the continuation of the event.

When Sean and Gretchen had triplets Jack, Paul and Sam in 2001 the family was living in the Kansas City area. Son Sam was diagnosed with Autism when he was 22 months old and Sean and Gretchen began to search for services. “There weren’t services like Rainbows in Kansas City,” said Gretchen. “So in 2004, we moved back to Wichita for Rainbows.”

They got Sam into Rainbows in April of that same year. By summer, Jack and Paul joined him. Not only did Sam have a great experience at Kids’ Cove, but Jack and Paul also loved it. With intensive, individualized, direct instruction from a team that included a Speech Language Pathologist, Occupational Therapist and a Physical Therapist, Sam blossomed. 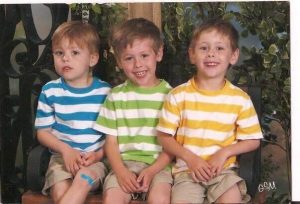 When Sam started at Kids’ Cove, he didn’t talk and he wouldn’t look at you. Today, he can say anything he wants to say. He learned to hold a spoon, eat breakfast and take turns. “I still remember the first time he drank out of a straw,” said Gretchen. “That’s how important the seeming little things were to us.”

The family also received services from Rainbows’ Targeted Case Management Program. “Initially we thought, why do we need this,” said Sean. “Thank God for them because we did need it. They helped us secure Sam’s Autism waiver and connected us to resources we knew nothing about. Rainbows continues to be a resource and we have lifelong relationships with staff members.”

“At Rainbows, we got our first taste of inclusion,” said Sean. “We didn’t even realize what inclusion meant. Because of our experience at Rainbows, as Sam moved into the school system we learned to be fierce advocates for our son and set expectations for working with him. Our experience with Rainbows gave us tools to speak in an educated and intelligent manner when we spoke at USD 259 Board meetings, advocating for services from the school district. When we were met with opposition, we were able to respond with practices from Rainbows that we knew worked.” 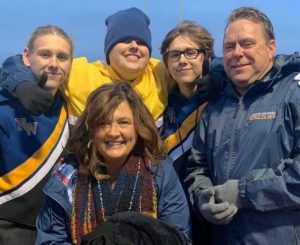 Sean and Gretchen continue to be strong advocates for people with special needs, carrying that passion they learned at Rainbows. At 20 years of age, Sam is a photographer. He’s very good on the computer and works in the community every day. “He’s out there in the world every day,” said Sean.

“Rainbows provided the foundation and made the other things possible.”